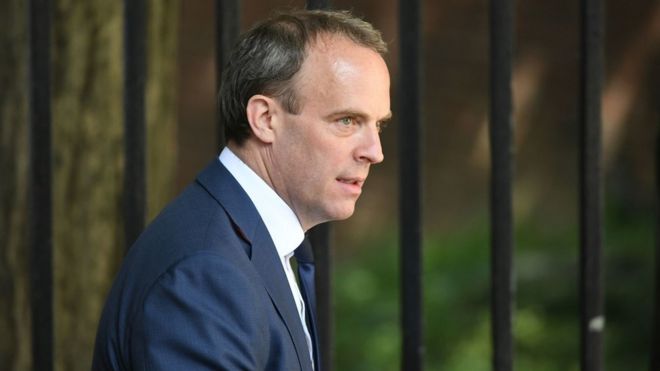 Foreign Secretary Dominic Raab will launch the government's new post-Brexit sanctions regime by naming the first violators to have their assets frozen.

In the past, Britain has almost always imposed sanctions collectively as a member of the United Nations or the European Union.

But after Brexit it can act alone.

It will target individuals or organisations accused of human rights violations around the world, as well as those who profit financially from those abuses.

What are sanctions and why do countries use them?
The foreign secretary will name several dozen people who will have their assets in the UK frozen and who will also be banned from entering the country.

The first list is expected to include individuals from Russia, Saudi Arabia and North Korea but not, as yet, China.

It comes amid tensions between the UK and China after the Chinese government introduced a new security law in Hong Kong, which Boris Johnson said violated freedoms of the UK's former colony.

BBC diplomatic correspondent James Landale said the new sanctions regime had been "long in coming, but forms a central plank of the government's foreign policy ambition to make Britain a global defender of international rules and human rights".

The Foreign Office said it will be the first time that the UK has imposed sanctions for human rights violations and abuses under a UK-only regime.

A spokesperson for the department said the new regime will allow the UK "to work independently with allies such as the US, Canada, Australia and the European Union".

"Future targets of the regime may include those who commit unlawful killings perpetrated against journalists and media workers, or activity motivated on the grounds of religion or belief," they said.

Mr Raab said: "From today, the UK will have new powers to stop those involved in serious human rights abuses and violations from entering the UK, channelling money through our banks and profiting from our economy.

"We will not let those who seek to inflict pain and destroy the lives of innocent victims benefit from what the UK has to offer."