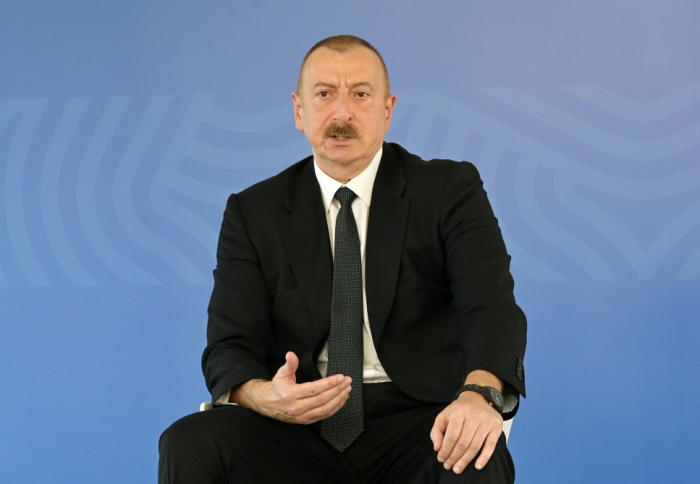 "We expect more serious, targeted and goal-oriented statements from the OSCE Minsk Group", President of the Republic of Azerbaijan made the remark on July 6 in an interview with Azerbaijan Television, Public Television and Khazar Television, AzVision.az reports.

The head of state stressed that there is no change in our position in the process of negotiations on the Armenian-Azerbaijani Nagorno-Karabakh conflict, and there can be no change. Azerbaijan's position is just and fair.

"Our position is based on both historical justice and international law. I have made enough statements on this issue, including in the framework of international events, and everyone knows about it. There is no change in our position and the conflict must be resolved within the territorial integrity of our country. Azerbaijan will never allow a second Armenian state to be created in its historical lands. All the occupied territories should be liberated and Azerbaijani citizens must return to their ancestral lands. This is a principled position, and the world community supports this position."

All leading international organizations several times have clearly made statements and adopted decisions and resolutions supporting Azerbaijan's territorial integrity. The UN, its Security Council, its General Assembly, the Non-Aligned Movement, the OSCE, the Organization of Islamic Cooperation, the European Parliament, the European Union, the Parliamentary Assembly of the Council of Europe, NATO and other organizations have adopted resolutions, which serve fully strengthening of our position.

"We expect to hear targeted statements from the Minsk Group. The Armenian Prime Minister says "Karabakh is Armenia." I personally answer to this claim, but why the Minsk Group does not respond? This statement, in fact, overturns the essence of the negotiations mediated by the Minsk Group, makes the talks virtually insignificant. Did the Minsk Group co-chairs react adequately to this claim? They did not! The Armenian side has been working on changing the format of the talks for two years claiming that Azerbaijan should hold negotiations with the so-called "leaders" of the so-called "Nagorno-Karabakh Republic". Is there any adequate answer to this? No! Conversely, we are answered with some abstract words. However, we demand clarity."

"The aggressor state of Armenia held illegal "elections" and the so-called "inauguration" in the occupied Nagorno-Karabakh region of Azerbaijan. Is there any adequate answer to this or not ?! After all, this is a clear provocation. This criminal regime has held illegal "elections" several times which were not recognized by any state. Why there is no adequate response to this? Why is it not said that this is a provocation and Armenia will be responsible for this provocation. We stand firmly in our position and justice is on our side. We have proved this both in the international arena and on the battlefield. People should not forget the April battles."