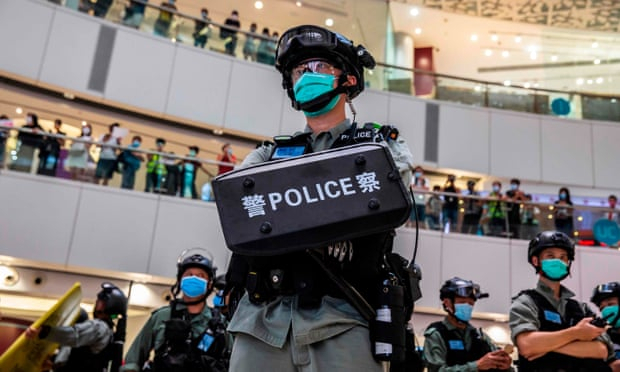 Hong Kong police have been granted sweeping new powers, including the ability to conduct raids without a warrant and secretly monitor suspects, after controversial security laws were imposed on the city by the Chinese central government.

The powers allow for the confiscation of property related to national security offences, and allow senior police to order the takedown of online material they believe breaches the law. The city’s chief executive can grant police permission to intercept communications and conduct covert surveillance. Penalties include HKD$100,000 (£10,300) fines and up to two years in prison.

They also allow police to enter and search premises for evidence without a warrant “under exceptional circumstances”, to restrict people under investigation from leaving Hong Kong, and to demand information from foreign and Taiwanese political organisations and agents on their Hong Kong-related activities.

The new powers were revealed when Hong Kong authorities released “implementation rules” late on Monday and swiftly used them to crack down on democratic behaviours, such as holding a protest sign.

The city’s chief executive, Carrie Lam, told “radicals”, who she said had brought danger to the country, “not to challenge the law or the consequences would be serious … If people are law abiding and never think about endangering national security there is no cause for concern ever.”

Asked about widespread concerns among local and foreign media that the laws put them at risk by criminalising acts of journalism, Lam said it was “not a question of me giving a guarantee on what you may or may not do”.

“If [the Hong Kong Foreign Correspondents’ Club] or reporters in Hong Kong can give me 100% guarantee that they will not commit offences under this legislation, then I can do this,” she said.

She accused foreign press and governments of stoking fear, saying the new laws were “not doom and gloom” and she had not noticed fear among residents. “This law only targets four types of urgent matters,” she said repeatedly. “It does not undermine the rights and freedoms of people in Hong Kong.”

The day before, eight people were arrested at a silent protest where demonstrators held up blank pieces of paper at the Kwun Tong shopping mall. They were protesting against the outlawing of pro-independence slogans, including “liberate Hong Kong, the revolution of our time”.

Following the approval of the security law, books by pro-democracy figures have been withdrawn from bookstores and library authorities are reviewing their book lists.

Beijing’s imposition of the laws has been criticised as an alarming encroachment on the freedoms of the semi-autonomous city and an expansion of its hardening line against dissent.

On Tuesday, the official Procuratorial Daily announced China had launched a special taskforce to increase political policing to maintain social stability on the mainland.

The taskforce would “crack down on all kinds of infiltration, subversion, sabotage, violent terrorist activities, ethnic separatist activities, and extreme religious activities”, according to the undated notes from a meeting of the taskforce published in the paper on Monday. The main responsibility of the taskforce was stated as safeguarding China’s political system. “Political security is related to national safety and people’s wellbeing,” the notes said.