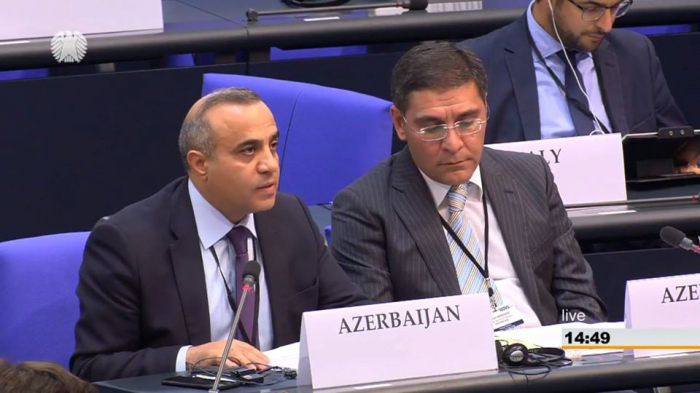 Azerbaijani MP, Vice President of OSCE Parliamentary Assembly Azay Guliyev has presented Resolution on “Promoting Connectivity in the OSCE Area Through Development Of Transport Links And Corridors, Including By Revitalizing The Ancient Silk Road” at the meeting of OSCE Committee on Economy, Science, Technology and Environmental Issues in Berlin, AzVision.az reports.

Trying to be a "spoiler", the head of the Armenian delegation, Hermine Naghdalyan opposed Azerbaijan's initiative. She stated that the OSCE was not an organization of transport but the agency dealing with security issues. However, representatives did not support her view. The author of the resolution Azay Guliyev explained that issues of security and regional cooperation are closely connected and the OSCE is responsible not only for security, but also for cooperation in a broad sense. Guliyev also added that it would be better if Naghdalyan studied the main documents of the organization, to which she is sent as a representative.

The members of the OSCE PA agreed and rejected the amendment proposed by their Armenian counterpart.

Other irrelevant amendments proposed by the Armenian delegation, which aimed not to "improve" the document, but to prevent the adoption of the initiative by Azerbaijan, were rejected. The author of the resolution noted that the presented document does not discriminate against anyone, who follows the OSCE principles and the norms of international law.

As a result of voting, the resolution suggested by Azerbaijan was adopted with an absolute majority (35 for, 1 against). Clearly, the only person who voted against the adoption of resolution was Hermine Naghdalyan. There is a symbolic meaning - the Armenian representative, who spoke against "regional isolation", is isolated by the members of the OSCE PA.

With the adoption of this resolution, Silk Road Support Group (SRG) under the Assembly received political support from the OSCE PA.