Elin Suleymanov meets with members of Azerbaijani community in US 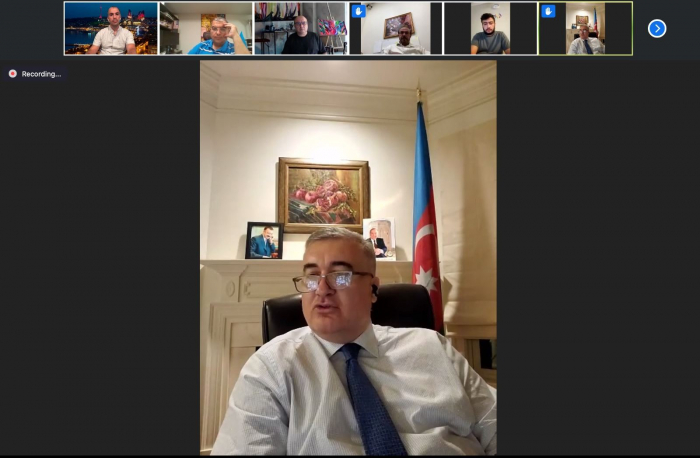 A video meeting between the Ambassador of Azerbaijan to the US Elin Suleymanov with members of numerous Azerbaijani communities living in various US states was held by the initiative and invitation of the Congress of Azerbaijani Societies of America (CASA) on July 23, AzVision.az reports with reference to the Azerbaijani Embassy in the US.

The CASA Network, as an independent network and networking platform of volunteers, was created by the initiative and collaboration of Azerbaijanis living in Texas, Massachusetts, New York, New Jersey, California and Florida.

The participants of the meeting observed a minute of silence in memory of the Azerbaijani servicemen and civilians who died during the recent battles in the direction of Azerbaijan’s Tovuz district in the Azerbaijani-Armenian border.

Elin Suleymanov appreciated the initiative of the community members, noting that in recent days Azerbaijanis living in the US found themselves in a difficult situation, as well as the expediency of jointly solving urgent issues by community members.

The ambassador spoke about Azerbaijan's cooperation with the US Congress and other state structures, and expressed deep gratitude to the community members for their support and contribution to bilateral relations between the two states.

Suleymanov called on the Azerbaijani communities to be more active in view of the provocations that the Armenian lobby is committing against Azerbaijan.

Then he spoke about the participation of communities in the actions held in the US states against the aggression of Armenia, thanked those who held the action in front of the embassy in Washington, thus supporting Azerbaijan, its flag, the President of Azerbaijan, Supreme Commander-in-Chief Ilham Aliyev.

“Restrained and cultural behavior of our citizens and compatriots during the protest actions can exemplify to others, and it cannot be compared with the extremely aggressive and wild behavior of Armenians,” Suleymanov noted.

The ambassador also regretfully recalled the incident that took place in LA.

“By the order of Azerbaijan’s President Ilham Aliyev, they will be provided with comprehensive support from the state,” he noted.

Noting the existing threat from the Armenian radical groups for the Azerbaijani citizens, including diplomatic missions in the US, Suleymanov urged his compatriots to be prudent and observe precautions.

Suleymanov said that he understands and shares the community members’ concern and fair anger, but at the same time urged not to succumb to the provocations of Armenian radicals, to be restrained and cold-blooded, and to demonstrate unity.

During the discussion, which lasted more than two hours, many topics were raised.

Meanwhile a group of Armenians living in Los Angeles, California, attacked and injured a group of Azerbaijanis who gathered to peacefully protest the Armenian aggression.

The incident took place July 21 in front of Azerbaijan's Consulate in the city where Armenians verbally and physically assaulted Azerbaijanis across the street, despite tight security measures by the L.A. Police Department.