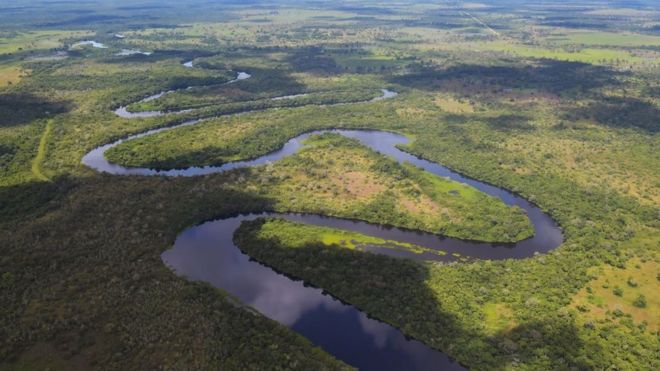 The number of forest fires in the Pantanal, the world's largest tropical wetlands, has tripled in 2020 compared to last year, according to Brazil's national space agency Inpe.

Thousands of species including jaguars, anteaters and migratory birds live in the 140,000-160,000 sq km area.

Last month was the worst June for fires in the neighbouring Amazon in 13 years.

The wetlands are located across Brazil, Paraguay and Bolivia and are one of the most biodiverse areas in the world.

Image copyrightPA MEDIAImage captionGiant anteater are one of the thousands of species in the Pantanal
Piranha, capuchin monkeys, green anacondas and thousands of plant species live in the basin which thrives off annual flooding following torrential rains.

The 3,682 fires detected in the region so far this year are the highest number since records began in 1998. In the same period in 2018 there were 277 in the area in total.

Members of environmental network the Pantanal Observatory called the fires "a social danger since, in addition to the economic damage and the loss of biodiversity, fires cause respiratory problems, eye irritation and allergies," according to Brazilian newspaper O Globo.

The organisation said that in two days, around 7,000 hectares were burnt as the result of both "criminal activity" and "climactic factors".

Wildfires often occur in the dry season in Brazil but they are also deliberately started in efforts to illegally deforest land for cattle ranching.

In the Bolivian Pantanal, fighting the fires has been complicated by the coronavirus pandemic which limits the number of people who can safely tackle the blazes, Carlos Pinto of the organisation Friends of Nature Foundation explained.