Turkey decries burning of its flag in Greece 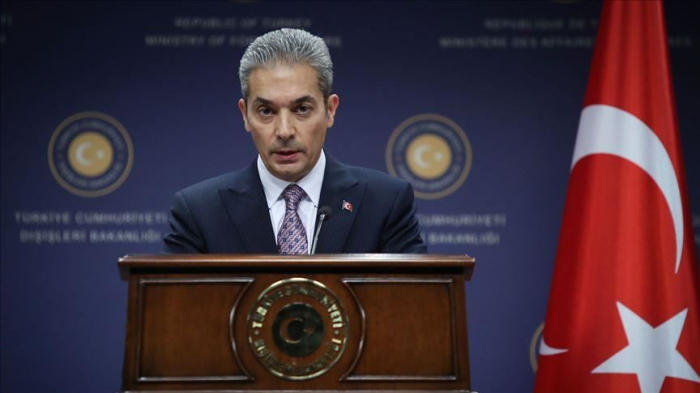 “We strongly condemn hostile statements made by members of the Greek Government and Parliament provoking the public opinion and allowing the burning of our glorious flag in Thessaloniki,” Hami Aksoy, the Foreign Ministry spokesman, said in a written statement.

Aksoy said Greece showcased its hostility against Islam and Turkey once again under the pretext of showing reaction against the reopening of the Hagia Sophia Grand Mosque for worship.

He said “the spoiled children of Europe”, who cannot accept the reopening of the iconic architecture as a mosque, were "delirious" again.

“These racist mindsets, who have not drawn the required lessons from history, those who disrespect our glorious flag should remember their fate in the Aegean,” Aksoy stressed.

“Greece should, from now on, wake up from the Byzantine dream that she has been unable to wake up for 567 years and get rid of her frustration emanating from it,” he said.

The Greek oppression against the Muslim Turkish minority in the country are registered by the decisions of the European Court of Human Rights, he noted, adding that Greece is the only European country which has no mosque in its capital and that it has condoned the destruction of historical mosques on its territory.

Aksoy highlighted that the Hagia Sophia Grand Mosque has opened for worship in line with the will of the Turkish nation.

He added that the Hagia Sophia Grand Mosque, like other cultural assets on the Turkish lands, belongs to Turkey, and said: "... it will be in our possession and protection forever."

He also stressed that opening the Hagia Sophia Grand Mosque for worship complies with the "requirements and spirit" of 1972 UNESCO Convention on the Protection of the World Cultural and Natural Heritage.

"No country can teach Turkey about exercising her national sovereignty," he warned.

“In line with Turkey's commitment and tradition of tolerance to all religious rights and freedoms, Great Hagia Sophia Mosque, the sanctuary of Islam, the religion of peace which embraces all religions, will continue to be open to all,” Aksoy said.