Unprecedented attack on a diplomatic mission of Azerbaijan in Europe- EUROPTER 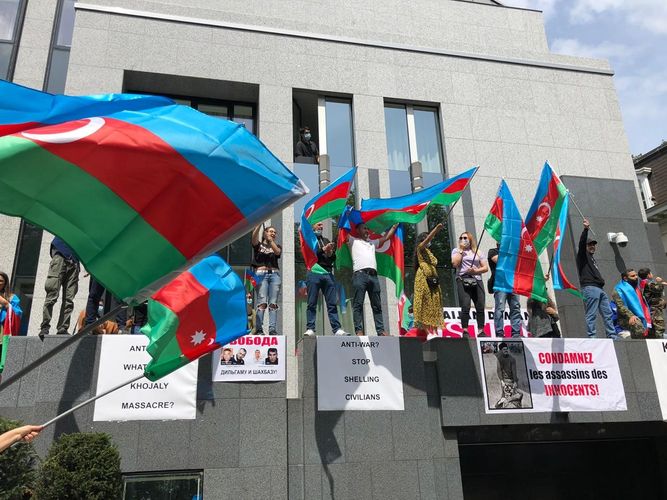 A violent rally accompanied by acts of vandalism by Armenian diaspora took place in front the Embassy of Azerbaijan in Brussels on 22 July 2020. Demonstrators even tried to penetrate the Mission building with a clear aim of doing more harm,AzVision.az reports citing EUREPORTER.

This was the continuation of the very recent attack to the premises of the Embassy on 19 July 2020.

This is apparently continuation of radical Armenian rallies and attacks on Azerbaijan in other parts of the world, including but not limited to Paris, Los Angeles, Netherlands, and Warsaw.

The rally turned into a terrorizing attack to the Mission, camouflaged as peaceful demonstration.

Protestors rally threw various objects including stones, pyrotechnic articles, paintball shells and bottles, at the Mission building, diplomats and women and children gathered within the fences of the Mission.

The attack continued for several hours even after the demonstration was officially supposed to be ended within the maximum limit of two hours.

As a result, several diplomats, and civilians, including media representative were left with serious injuries and taken by ambulances to the hospitals.

The consequences of this rally were clearly a violation of international law, namely the international obligations envisaged in Vienna Convention on Diplomatic Relations of 1961.

The victims of this attack are citizens of Belgium, and MEPs from all sides call upon the Government of Belgium should show determination and act according to Belgium legislation and its international obligations as host country to punish all those involved in such violence in the heart of Europe.