Flag lowered at US consulate in Chengdu as China takes control 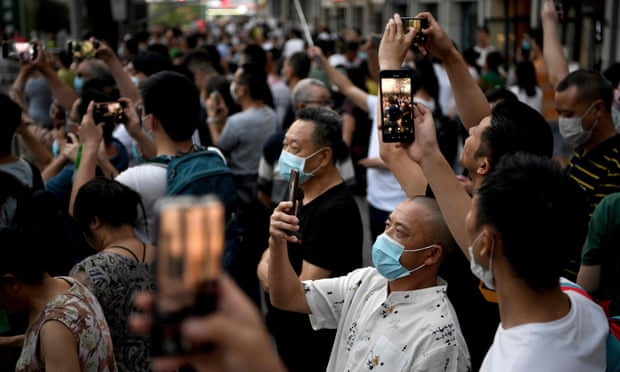 The US flag has been lowered at the US consulate in Chengdu, before the Chinese foreign ministry announced the diplomatic outpost was officially closed at 10am, the Guardian reports.

China on Friday ordered the closure in response to Washington’s order for the Chinese consulate in Houston to be shut.

Police in Chengdu restricted access to the area around the consulate on Monday morning, and four officials in personal protective gear could be seen walking towards the consulate at about 10:24am local time.

“Chinese authorities entered through the front entrance and took it over,” the foreign ministry said in a statement.

Local residents in Chengdu flocked to the consulate on Sunday, taking selfies and waving Chinese flags, as officials prepared to remove its official plaque.

A constant stream of onlookers in the city of 16.5 million people flowed past the consulate, many taking photos.

Tensions between the two countries over trade and the coronavirus rose another notch last week when on Tuesday the US ordered China’s consulate in Texas closed, saying it was a hub of espionage and intellectual property theft.

Large numbers of police kept people in Chengdu from getting too close and put a quick stop to any provocative gestures or obvious signs of joy as the Americans left.

One passerby launched into a nationalist chant and was quickly silenced, according to a video posted on social media. AFP journalists saw security confiscate a banner. The measures however didn’t stop one person draping a huge Chinese flag from his balcony and shouting “China” into the street.

Boos also went up when a bus with tinted windows left the building on Sunday.

An attempt to pry the main plaque from the wall of the shuttered consulate with a crowbar, hammer and chisel, failed.

Beijing had not given a date for the consulate’s closure, but on Saturday most of the insignia were stripped from the building.

The US has an embassy in Beijing as well as five consulates in mainland China – including the one in Chengdu – plus one in Hong Kong.

The Chengdu consulate covered the country’s south-west, including – notably – Tibet. Many Tibetans accuse the central government of religious repression and eroding their culture.

Shutting down the consulate, China’s foreign ministry said on Friday, was a “legitimate and necessary response to the unreasonable measures by the United States”.

“Some personnel at the US consulate in Chengdu were engaged in activities outside of their capacity, interfered in China’s internal affairs, and endangered China’s security and interests,” spokesman Wang Wenbin said.

In 2013, China demanded a US explanation after news reports said a top-secret map leaked by fugitive intelligence analyst Edward Snowden showed surveillance facilities at US embassies and consulates worldwide – including at Chengdu.

Chinese nationalists had called for a more strident response from the authorities, such as the closure of the US consulate in Hong Kong, a move that would raise tensions further. The semi-autonomous city saw large, rolling pro-democracy protests last year and Beijing has frequently said it suspects the US of being behind the unrest.

US Secretary of State Mike Pompeo said on Thursday the Chinese consulate in Houston was a “hub of spying and intellectual property theft”. The fourth-largest city in the US, Houston is a major global centre for medical and biological research.

Washington officials said attempts to steal secrets in those fields had grown too numerous to ignore.