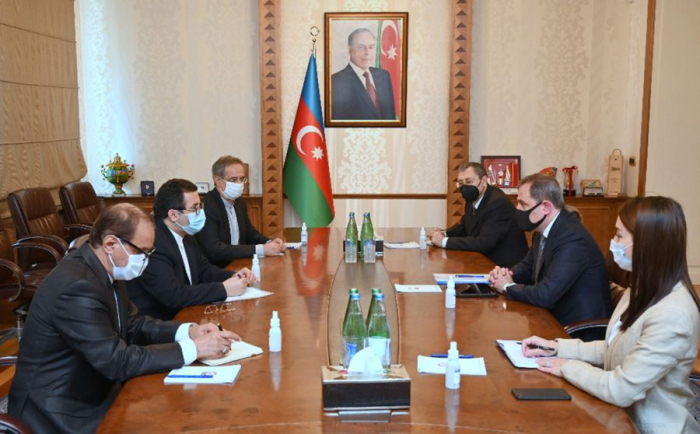 While expressing satisfaction with the meeting, Bayramov spoke about the friendly, fraternal relations of cooperation between the two countries, which have deep historical roots.

The minister expressed satisfaction with the development of these relations in conditions of mutual respect and support.

While speaking about the contribution of Azerbaijani national leader Heydar Aliyev to the development of these relations, the minister stressed that presently, the attention is paid to the further development of relations at the level of the presidents of both countries.

Bayramov stressed the development of relations and mutual support between the two countries both in the regional and multilateral formats.

The minister highly appreciated Iran’s position on the Armenia-Azerbaijan Nagorno-Karabakh conflict, based on international law and containing firm support for Azerbaijan’s territorial integrity.

The minister also expressed gratitude to the Iranian ambassador for the fair position of his country in connection with the military provocation committed by the Armenian armed forces in the direction of Azerbaijan’s Tovuz district on the Azerbaijani-Armenian border on July 12.

The ambassador also expressed gratitude for the support rendered to him during his diplomatic activity in Azerbaijan.

The sides also exchanged the views on other issues of mutual interest.

Bayramov wished the ambassador good luck in his future activity.