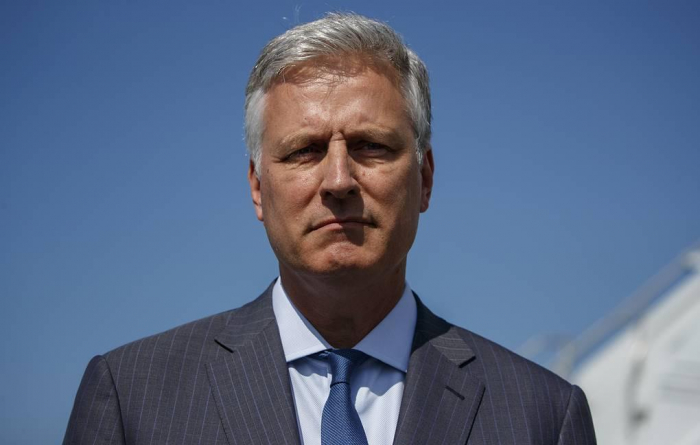 "He has mild symptoms and has been self-isolating and working from a secure location off site," the White House said in a statement. "There is no risk of exposure to the President or the Vice President."

The diagnosis has made O'Brien, a top aide for Trump, the highest ranking White House official known to have tested positive for the virus, which has infected more than 4.2 million Americans and killed more than 145,000 people in the United States.

Speaking to reporters at the White House before a trip to North Carolina Monday afternoon, Trump said he hasn't seen O'Brien lately.

"I heard he tested. Yeah. I have not seen him. I'm calling him later," said the president, adding that he didn't know when his fourth national security advisor first tested positive.

O'Brien, 54, has been out of the office since late last week, Bloomberg News reported, citing people familiar with the situation. He left his office in the White House last Thursday, CNN reported, citing a source.

O'Brien reportedly came down with coronavirus after a family event and has been isolating at home while still running the National Security Council (NSC), doing most of his work by phone.

O'Brien, whom Trump tapped to lead the agency in September 2019 after the ousting of John Bolton, recently returned from Europe, where he met with officials from the United Kingdom, France, Germany and Italy. Multiple photos released from the trip showed that O'Brien had neither practiced social distancing nor worn a mask.


The White House recently ended regular temperature checks for all those entering the White House complex, but those who will come into close contact with Trump are still given rapid tests.

"As I've made clear from this podium, the president is the most tested man in America," McEnany told reporters at the White House. "He's tested more than anyone, multiple times a day, and we believe that he's acting appropriately."

However, Trump has dismissed McEnany's claim that he takes more than one test a day.

"I didn't know about more than one. I do take probably, on average, a test every two days, three days," he told reporters during a White House press briefing last week. "I don't know of any time I've taken two tests in one day, but I could see that happening."

Last week, a cafeteria employee working in the Eisenhower Executive Office Building, which is close to the White House, tested positive for coronavirus, as did a U.S. Marine assigned to Trump's helicopter squadron ahead of the president's planned trip to his golf club in Bedminster, New Jersey.