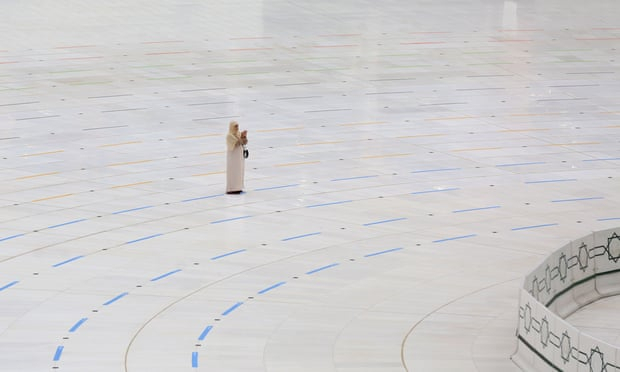 Muslim pilgrims have begun the annual hajj in the holy city of Mecca in a dramatically downsized version as the hosts. Saudi Arabia try to prevent any spread of coronavirus during the pilgrimage, AzVision.az reports citing the Guardian.

The hajj, one of the five pillars or most important practices of Islam and an obligation for able-bodied Muslims at least once in their lifetime, is usually one of the world’s largest religious gatherings as around 2.5 million people descend on the city from all over the world.

But this year attendance is being limited to 10,000 people already residing in the kingdom as the authorities seek to control Covid-19. The disease has already infected more than 270,000 people in Saudi Arabia, placing it in the top 20 worst-affected countries.

“There are no security-related concerns in this pilgrimage, but [downsizing] is to protect pilgrims from the danger of the pandemic,” said Khalid bin Qarar al-Harbi, Saudi Arabia’s director of public security. The holy Ka’bah, the most sacred site in Islam, will be cordoned off.

Pilgrims will be required to wear masks and observe social distancing during a series of religious rites that are completed over five days in Mecca and its surroundings in western Saudi Arabia.

Those selected to take part in the hajj were subject to temperature checks and placed in quarantine as they began trickling into Mecca at the weekend.

State media showed health workers sanitising their luggage, and some pilgrims reported being given electronic wristbands to allow authorities to monitor their whereabouts.

There have now been 16.67 million cases of coronavirus around the world and more than 659,000 deaths, according to the Johns Hopkins University tracker. The US has the world’s most serious outbreak, with almost 150,000 deaths and 4.3 million cases.

The US president, Donald Trump, halted his daily White House briefing abruptly on Tuesday night after being questioned about why he described as “spectacular” a doctor who wrongly dismissed the use of face masks to combat the coronavirus. The doctor also reportedly claimed that alien DNA is used in medical treatments and some gynaecological problems are caused by people dreaming about having sex with demons.

Florida, the third most populous state in the US, has reported another record one-day rise in coronavirus deaths. The state health department said 191 people died from the disease in the 24 hours to Tuesday evening.

Cases in Texas passed the 400,000 mark, fuelling fears that the United States is still not taking control of the outbreak and adding pressure on Congress to pass another massive economic aid package.

The scale of the problem facing authorities in India was underlined by a study showing that more than half the people living in the slums of Mumbai have had the coronavirus. The city carried out random blood tests on 6,936 people and found that 57% of slum-dwellers and 16% of non-slum residents had virus antibodies. Mumbai, where about 40% of the population of 20 million live in slums, has reported more than 110,000 infections and more than 6,000 deaths so far. It mirrors an antibody study published last week showing that almost 25% of people in Delhi could have contracted the disease.

China reported 101 new coronavirus cases in the mainland for 28 July, the highest in over three and a half months, the health commission said on Wednesday. China has moved quickly to stem outbreaks by contact tracing and reimposing restrictions in affected areas. Recently many of the new infections are reported to have come from the far western region of Xinjiang, where 89 have been tallied for 28 July. One was recorded in Beijing, while three were imported cases, according to a statement by the National Health Commission.

In Australia, the state of Victoria recorded 295 new cases of coronavirus in the past 24 hours, down 89 from Tuesday’s figure of 384, which in turn was 150 fewer than were recorded in the record high numbers on Monday. Nine more people have died, which is close to the national record 10 deaths reported in the state one day last week. There were 19 new cases in New South Wales state, prompting neighbouring Queensland to close its border to anyone from Sydney.

New Zealand recorded two new cases of Covid-19, both diagnosed in returning travellers to the country who are quarantined in managed isolation facilities. That is the case for all of New Zealand’s 23 active cases of the coronavirus – there is no known community transmission. The government also said it would start charging some travellers for the cost of their two-week stay in quarantine.

Doctors have warned that the Pacific region faces a wider health crisis as its already fragile health systems are forced to take resources away from treating diseases such as tuberculosis and HIV/Aids.