Truth on Karabakh in skies of New York 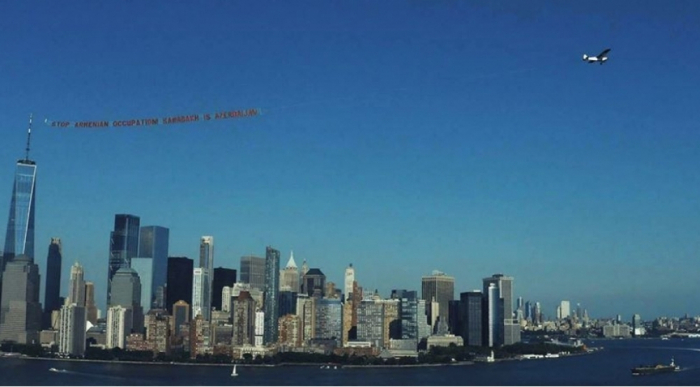 Airplanes carrying a banner "Karabakh is Azerbaijan!", "Stop Armenian Occupation" were flown all over New York, informing a large number of the city residents about Armenian aggression against Azerbaijan, the State Committee for Work with the Diaspora told Azvision.az.

The plane took off from the island of Manhattan. The plane circled over New York for three hours and flew in front of government offices on Manhattan Island, famous business centres such as the Empire Building, Business Center and residential buildings. The slogan opened in the sky attracted the attention of the local population and was welcomed with great interest.

Azerbaijanis gathered in Liberty Park in New Jersey, holding the tricolor state flag of Azerbaijan, watched the event with slogans and applause.

The organizer of the project, Elmar Bayramov, said that the Armenians made serious efforts to prevent the implementation of this project. For two weeks, they put pressure on Airads, an air advertising company. However, all their efforts remained fruitless.