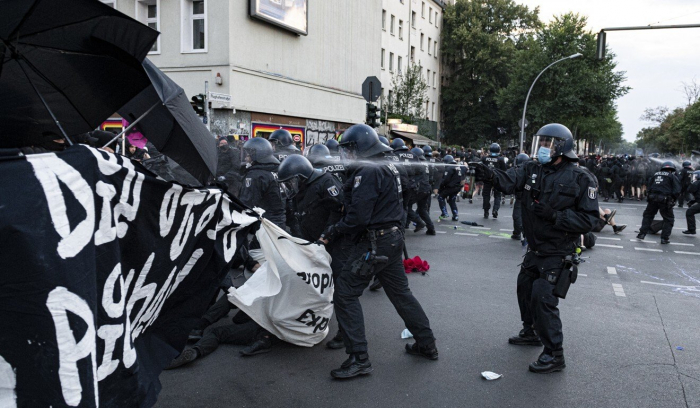 German police said 45 officers were injured and 133 arrested after weekend demonstrations in Berlin. About 20,000 took part in a ‘day of freedom’ protest on Saturday, and were gathering again on Sunday.

Some 45 German  police officers were injured in a wave of weekend demonstrations in Berlin including protests against coronavirus restrictions, police said as protesters gathered again in smaller numbers on Sunday.

A total of 133 people were arrested during Saturday’s protests, which included a huge “day of freedom” demo against coronavirus restrictions, police said in a statement. The arrests were for offences including resisting police officers, breach of the peace and the use of unconstitutional symbols. 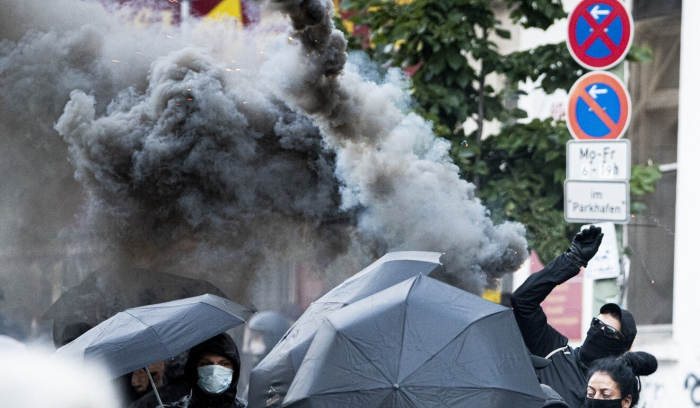 Around 20,000 people took part in the “day of freedom” demonstration, the majority not wearing masks or respecting Germany’s 1.5-metre (five-foot) social distancing requirement.

The crowd, a mixture of hard left and right, and conspiracy theorists, shouted “We are the second wave” as they converged on the Brandenburg Gate, demanding “resistance” and dubbing the pandemic “the biggest conspiracy theory”.

Police began dispersing the crowds in the late afternoon, but hundreds of protesters remained at the Brandenburg Gate late into the evening.

Police have launched legal proceedings against organisers for not respecting virus hygiene rules. 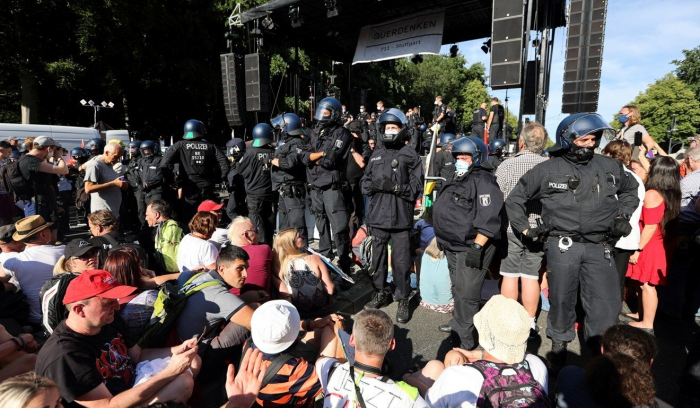 In a separate anti-fascist demonstration in the southern Neukoelln district, protesters threw stones at police officers, let off fireworks and damaged two police vehicles and a local party office.

Several officers were injured while dispersing the crowd, including three who were treated in hospital after being hit in the face by shards of glass.

Arrests were also made at smaller unofficial protests. A total of 1,100 officers were deployed during the day.

A few hundred protesters gathered to the west of the Brandenburg gate on Sunday, according to reports from the scene, with the majority wearing masks and observing social distancing guidelines.

Despite Germany’s comparatively low toll, authorities are concerned at a rise in infections over recent weeks and politicians took to social media to criticise Saturday’s rally as irresponsible.