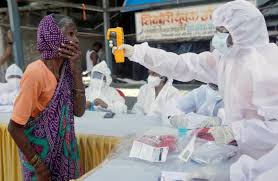 Recoveries are now over 1.23 million, bringing the recovery rate to 65.76% and leaving 586,298 active cases across the country, according to the latest update.

The western state of Maharashtra continues to be the worst-hit in the country, having recorded 450,196 infections and 15,842 deaths so far.

Despite the worrying numbers, the Maharashtra government has now allowed all shops in Mumbai, the state capital and India’s financial hub, to remain open throughout the day.

Malls in the city are also set to reopen from August 5.

Earlier on Monday, the World Health Organization (WHO) warned that India is in for a long fight against COVID-19.

Mike Ryan, head of the WHO’s emergencies program, said countries with transmission rates as high as India and Brazil need to brace themselves for a big battle.

“The way out is long and requires a sustained commitment,” he said.