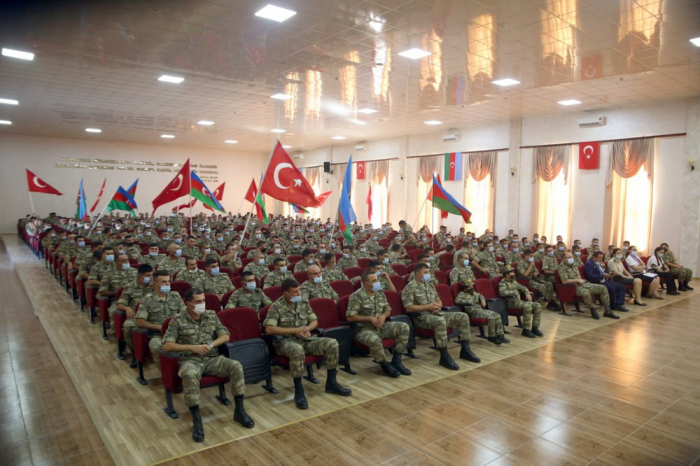 Within the Annual Action Plan approved by the Minister of Defense, the Army Ideological and Cultural Center named after Hazi Aslanov has carried out activities on fulfillment of the tasks in the field of strengthening ideological work and increasing the military-patriotic spirit in the Azerbaijan Army, AzVision.az reports citing Azerbaijan's Defense Ministry.

The tasks were assigned by the President of the Republic of Azerbaijan, Supreme Commander-in-Chief of the Armed Forces, Mr. Ilham Aliyev in his last speeches.

The events were attended by soldiers and officers of military units, as well as Honored Artist of Azerbaijan Agalar Bayramov.

Speakers at the solemn ceremonies spoke about the importance of ideological work, stages in the history of Azerbaijan statehood, the Armenia-Azerbaijan, Nagorno-Karabakh conflict, and the Tovuz battles that happened as a result of the provocation of the armed forces of Armenia.

The military personnel was presented with a video with the speech of the President of the Republic of Azerbaijan, Mr. Ilham Aliyev, and a historical chronicle about the statehood and military history of Azerbaijan.

Honored Artist A. Bayramov recited poems dedicated to the Motherland, the Flag of Azerbaijan, and Shehids (martyrs).

During the event within the framework of the "Letter to a Soldier" Project soldiers wrote letters to their families and expressed their best wishes.

The events ended with a concert program consisting of military-patriotic songs and military marches presented by the Army Ideological and Cultural Center.