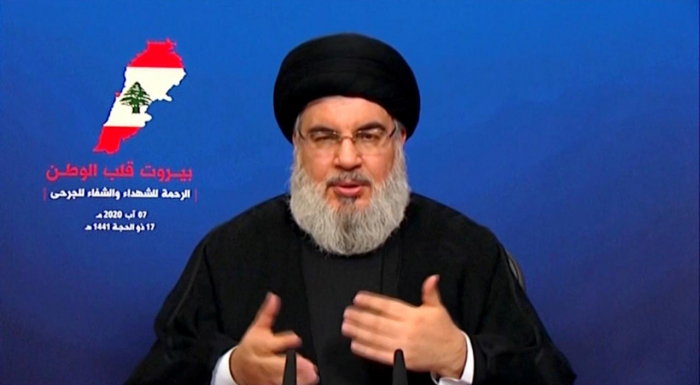 Hezbollah’s leader on Friday denied accusations that his Iran-backed movement has arms warehoused at Beirut port, calling for an investigation into the biggest explosion to hit the Lebanese capital.

In a televised speech, Sayyed Hassan Nasrallah called Tuesday’s explosion “an exceptional event” that required unity and calm. The heavily armed Shi’ite Hezbollah would make its political position clear after the dust settles, he added.

Nasrallah praised solidarity and aid pouring in from around the world, including a visit by French President Emmanuel Macron. He said this presented an opportunity for Lebanon, already deep in financial crisis.

Rescuers were sifting rubble to try to find anyone still alive after the explosion of 2,750 tonnes of ammonium nitrate that killed 154 people, injured 5,000 and destroyed a swathe of the Mediterranean city.

President Michel Aoun said the investigation would examine whether the cause was negligence, an accident or outside interference such as a bomb. Officials have said the explosive material was stored unsafely for years at the port.

Nasrallah - whose faction is a big backer of the current government along with Aoun and other allies - asked why the ammonium nitrate was at the port no matter the cause of the blast.

“Even if a plane struck, or if it was an intentional act, if it turns out this nitrate had been at the port for years in this way, it means part of the case is absolutely negligence and corruption,” he said.

Israel, which has fought many wars with Hezbollah and is an enemy state of Lebanon, has denied any role in the explosion.

Nasrallah called for a fair investigation to reveal the truth and strict accountability for anyone responsible without any political cover. Otherwise, “that means there is no state.”

He said if political parties trusted the Lebanese military as they say, they should let it investigate the blast, without mentioning an international probe which others have called for.

From right after the blast, he said without naming names, some political powers in Lebanon and the region had sought to blame Hezbollah.

“They came out with preconceived statements... They want to say to Beirut’s people that those who destroyed your homes and killed your children are Hezbollah,” he added.

“I absolutely, categorically deny the presence of any missiles or any material for us in any warehouse at the port.”