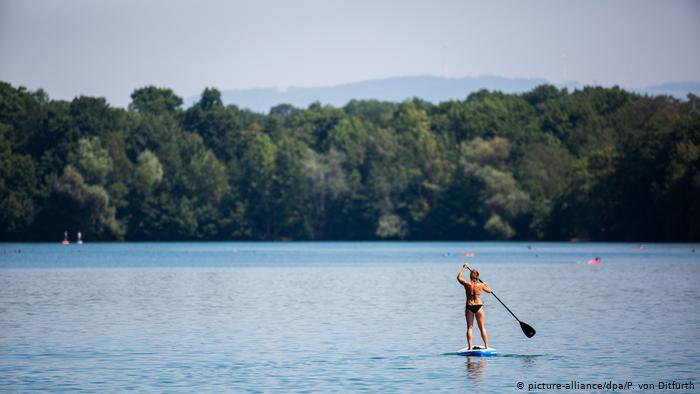 Western Europe is seeing record-breaking temperatures of nearly 40 degrees Celsius as people flock to cool off at beaches and lakes. There are concerns about COVID-19 social distancing in popular tourist spots.

This weekend temperatures have exceeded 38 degrees Celsius (100.4 degrees Fahrenheit) in some parts of the country. With many Germans on summer holiday and some foreign travel restrictions still in place, authorities feared that people heading to lakes would not respect social distancing. However, crowds at Germany's lakes were somewhat smaller than expected.

Such hot temperatures and little or no rainfall mean that most of the country is under a fire risk warning. Despite this, German people are taking the opportunity to barbecue. There are warnings for storms in the coming days across the country.

In parts of the UK, temperatures are up to 36 degrees Celsius, the hottest August temperatures recorded for almost 20 years. Cases of COVID-19 remain high in Europe's worst-affected country, but many revelers still headed to popular seaside resorts like Brighton to enjoy the water.

Travel warnings are in place for all or part of Belgium for many European countries, including Germany, after coronavirus cases spiked in the province of Antwerp. Belgians nevertheless took the opportunity to head to the beach as temperatures reached the high 30s.

Shortly after Paris made face masks for all compulsory this week, the French capital saw a heatwave alert system put in place by the government. Tourists are being urged to respect social distancing and continue wearing masks despite the heat.

Not quite Baltic temperatures

Back in Germany, authorities in the state of Schleswig-Holstein called for beach visitors to keep respecting social distancing. Many feared that beaches would be overwhelmed. School summer holidays are drawing to a close and families took the chance to have a dip in the Baltic Sea — normally a place synonymous with freezing temperatures.