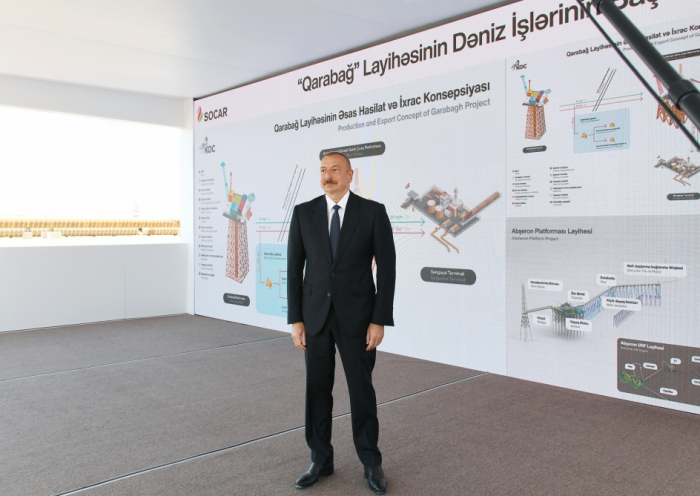 Our special attention is paid to the completion of the Southern Gas Corridor, President of Azerbaijan Ilham Aliyev said in his interview with Azerbaijan Television during a ceremony at Baku Deep Water Jackets Plant named after Heydar Aliyev to send a jacket of Karabakh field offshore, AzVison.az reports.

President Ilham Aliyev said that TAP project is also being successfully implemented: “TAP which is the fourth and last project, is nearing completion. Therefore, I believe that in a few months, at the initiative of the Azerbaijani state and as a result of large-scale international cooperation, the construction of three interconnected gas pipelines with a length of 3,500 kilometres will be completed and Azerbaijani gas will be delivered to Europe. Thus, the Southern Gas Corridor will fully operate. This is a very important and historic event for us as it allows us to ensure the full development of the Shah Deniz field."

"Also, I must say that without the construction of the Southern Gas Corridor, any investor would not invest in this or any other project, or would hesitate. The reason is that there must be a road to export gas from the Absheron gas condensate field, as well as natural gas from the Karabakh field and other fields. Therefore, the importance of the Southern Gas Corridor is not limited to the Shah Deniz project. Without the implementation of this project, our energy policy could be incomplete. However, today our energy policy fully meets the interests of our country. The Shah Deniz field will deliver gas to Azerbaijan and partner countries almost a hundred years later. At the same time, we intend to expand the scope of our export geography. Shah Deniz gas will be delivered to Georgia, Turkey, Bulgaria, Greece and Italy. If a gas network is established in Albania, it will be our natural partner, and we can export gas there as well. It is also possible to supply Azerbaijani gas to other neighbouring countries in the Balkans", Ilham Aliyev stated.

"Therefore, the Southern Gas Corridor is our historic achievement and is expected to be completed. I want to say again that we carried out the works in all fields in a purposeful way. One project leads to another one. For instance, if the Azeri-Chirag-Guneshli contract was not signed in 1994, we would not have any other project. Or if the contract on Shah Deniz was not signed, today we would not be able to ensure not only the energy security of other countries but also our own. The reason is that Shah Deniz is the main source for us and all these projects enable us to draw up a new energy map of Eurasia. I have to say that Azerbaijan will remain a strategic partner for many countries for a long time”, Aliyev added.