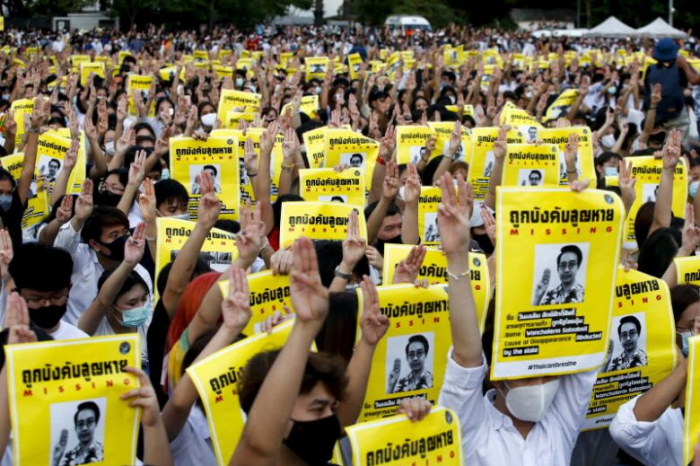 Thousands joined an anti-government demonstration at a Thai university on Monday, the largest such protest by students, challenging the government and conservative establishment even as royalist rivals held their own rally.

About 3,000 to 4,000 protesters chanted “Long live democracy” at Thammasat University on Bangkok’s outskirts, with fiery speeches calling for the resignation of Prime Minister Prayuth Chan-ocha, who first seized power in a 2014 coup.

Earlier on Monday, dozens of government supporters rallied in front of Parliament House on Monday, saying the student protests could threaten Thailand’s monarchy, which they consider a sacred institution.

In a sign of a more coordinated opposition to the students, nationalist activist Sumet Trakulwoonnoo, 46, announced a new pro-government group, the Coordination Center of Vocational Students for the Protection of National Institutions (CVPI).

“We’re setting up to remind youth groups, parents, teachers and officials about the danger to the nation from these people who are instigating youth to become godless and obsessed with Western culture, do drugs and hate their parents and teachers,” Sumet told reporters.

The anti-government protesters have made a growing number of references to the monarchy, a highly sensitive topic, and one speaker at a recent rally called for its reform.

The students accused the pro-government demonstrators of trying to create confrontation that could lead to another military intervention.

“We do not want this and will oppose it,” Nick Thanawit, a student activist from Maha Sarakham University, told the crowd.

Two activists involved in the student protests were arrested on Friday on charges of sedition and breaking restrictions to stop the spread of the novel coronavirus. They were later released on bail.

Human Rights Watch said that several other protesters around the country had been harassed.