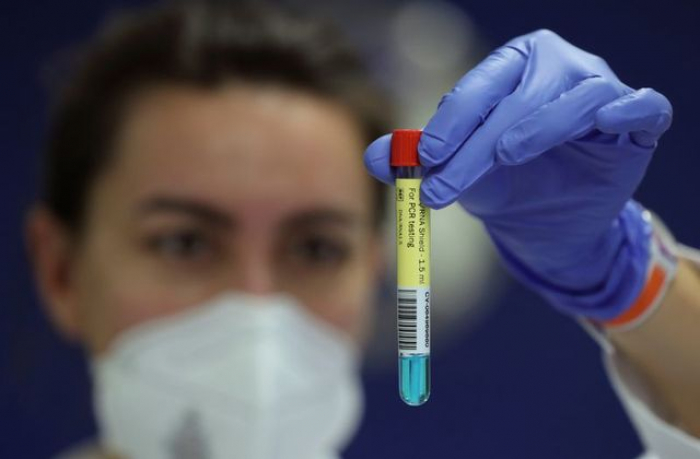 Beginning from September, thousands of students at a Belgian university will collect weekly a sample of their saliva for a rapid COVID-19 test replacing more commonly used swabs - one of Europe’s largest experiments with the new testing method.

The pilot scheme could be applied in other universities, schools or companies if it proves successful in faster identifying clusters of infections among students, Belgian researchers and government officials told Reuters.

Belgium, among the European countries hardest hit by the pandemic, plans to boost its testing capacity from the autumn.

Around 30,000 students and academic staff at the Belgian University of Liege will use the self-tests at home and take the tube with the saliva sample to the university labs every week through December.

“They will have the results in the evening,” Fabrice Bureau, deputy director for research at the university, told Reuters.

Saliva at-home tests could vastly increase testing capacity, as they are simpler and faster than common nasopharyngeal swabs, which some people find unpleasant.

But they are less accurate as the virus is more likely to be found in the nose and in the back of the throat than in the saliva, especially in individuals with a low viral load, a study by the Belgian medicine agency said last week.

Nasal swabs detect the virus in 80% of positive cases, while saliva tests have a 60% rate of success, Bureau said.

This could lead to a higher number of infected people being wrongly reported as not having contracted the virus. However, the weekly repetition of saliva tests would partly offset this shortfall, Bureau said.

The saliva test, developed by the university itself, is expected to be used in Belgium under a special authorisation granted by national authorities before it obtains a European Union mark of safety, according to the minister in charge of testing, Philippe De Backer.

Saliva tubes significantly reduce the time and the staff needed to perform tests as the inactivation of the virus potentially collected in the samples - the most time-consuming part of the testing process - is done in the tube itself with the automatic release of chemicals once its cap is sealed.

Usually this part of the testing process is performed in high-security labs by medical experts.

Asked whether at-home tests could expose healthy people to the virus if the tube was not properly closed, Bureau said there was a risk. De Backer played down the dangers, saying infected people could contaminate others even without the tube.

UNTESTED TESTS
The use of saliva tests has been relatively limited so far.

Britain is currently trialling a saliva test against swabs on about 14,000 people in a bid to find a simpler and quicker way of detecting outbreaks.

In May, the U.S. Food and Drug Administration approved the first at-home saliva diagnostic test.

De Backer said the Belgian government would monitor the pilot project closely and might include it in its national strategy to boost testing if it proved successful.

From October Belgium, a country of 11 million, plans to test up to 90,000 people a day, of which nearly half via traditional labs with automated testing machines made by large companies such as Switzerland’s Roche.

Such tests only work with disposable plastics and reagents produced by the suppliers of the machines - a feature that caused shortages at the height of the crisis as demand rocketed.

The remainder would be done with so-called open testing platforms based on machines that can process different chemical kits and reagents, such as those made by U.S firm Thermo Fisher.

Some of the chemicals and plastics needed for the open platform will be provided by the University of Liege, which is already able to produce reagents for millions of tests a week, Bureau said.