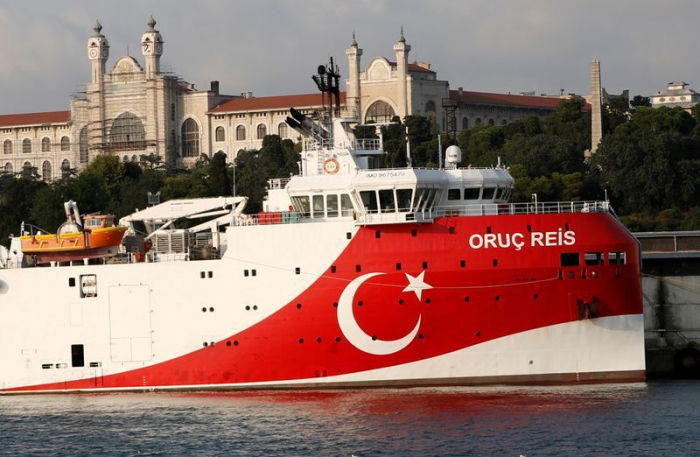 A Greek and a Turkish warship were involved in a mini-collision on Wednesday during a standoff in the eastern Mediterranean, a Greek defence source said, describing it as an "accident".

Tensions have risen this week after Turkey sent a survey vessel to the region, escorted by warships, to map out sea territory for possible oil and gas drilling - an area where Turkey and Greece both claim jurisdiction. EU foreign ministers were due to discuss the issue on Friday.

The Turkish Oruc Reis survey ship has been moving between Cyprus and the Greek island of Crete, shadowed by a number of Greek frigates. On Wednesday one of them, the Limnos, was approaching the survey vessel when it came into the path of one of its Turkish naval escorts, the Kemal Reis.

The Greek frigate manoeuvred to avoid a head-on collision and in the process its bow touched the rear of the Turkish frigate, the defence source said.

"It was an accident," the source said, adding the Limnos was not damaged. It subsequently took part in a joint military exercise with France off Crete on Thursday morning.

There was no immediate comment on the incident from the Turkish ministry of defence.

Turkish President Tayyip Erdogan said on Thursday that any attack on a Turkish ship exploring for oil and gas in disputed Mediterranean waters would incur a "high price" and suggested Turkey had already acted on that warning.

"We said that if you attack our Oruc Reis you will pay ahigh price, and they got their first answer today," Erdogan saidin a speech in Ankara, without giving details.

Greece and Turkey are allies in NATO but their relations have long been fraught with tension. Disputes have ranged from boundaries of offshore continental shelves and airspace to the ethnically split island of Cyprus. In 1996 they almost went to war over ownership of uninhabited islets in the Aegean Sea.