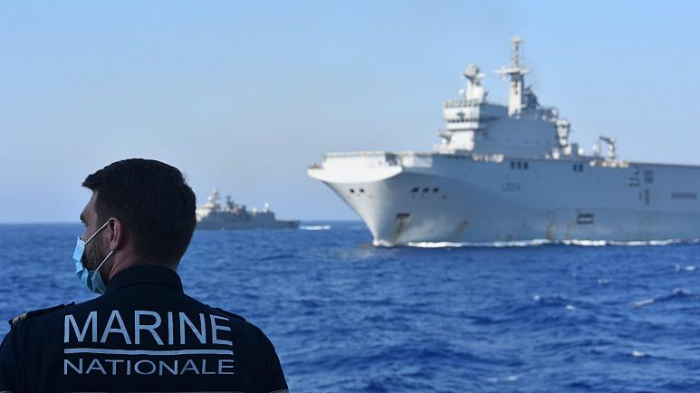 Turkish President Recep Tayyip Erdogan had said Turkey would press ahead with its search for oil and gas in the disputed waters until August 23 as planned.

But after talks with Germany, he signalled that Ankara and Berlin had agreed to a “softening” of positions after that date.

There was no indication as to whether Athens had been consulted, or agreed, on the matter.

Erdogan warned, however, that Turkey would strongly respond to any “harassment” of its vessels by Greece.

Turkey has a research ship accompanied by two warships prospecting between Cyprus and the Greek island of Crete, while Greece deployed its own naval vessels to the area.

Dendias said he hoped for a resolution but added that the question had to be "put to the Turks.”

The State Department said Pompeo and Dendias discussed “the urgent need to reduce tensions in the Eastern Mediterranean.”

German Foreign Minister Heiko Maas, whose country holds the rotating EU presidency, said ahead of the talks that “the provocations" that are happening in the eastern Mediterranean “can’t continue.”

“Nor can the Turkish drilling," he said. "We are working toward a direct dialogue between the parties that would contribute to finding a solution for this issue,” Maas added that there should be no drilling during any negotiations.

Although the meeting was not expected to produce any decisions, Athens is seeking backing from its partners in the 27-country bloc and a commitment for potential EU sanctions in the dispute with Turkey.

So far, only France has responded, pledging to boost its military presence in the eastern Mediterranean and sending two warships to the area Thursday for joint drills with the Greek navy.

Relations between historic regional rivals — and nominal NATO allies — Greece and Turkey have hit a more than two-decade low after Turkey sent a seismic research ship, escorted by warships, to prospect on Monday for potential offshore oil and gas in waters Athens claims as its own.

Greece placed its armed forces on high alert and sent warships to the spot, south of Turkey between Crete and the island nation of Cyprus, demanding the vessels' withdrawal.

Turkey claims it has every right to prospect in the area.