U.S. signs deal on redeployment of its troops from Germany to Poland 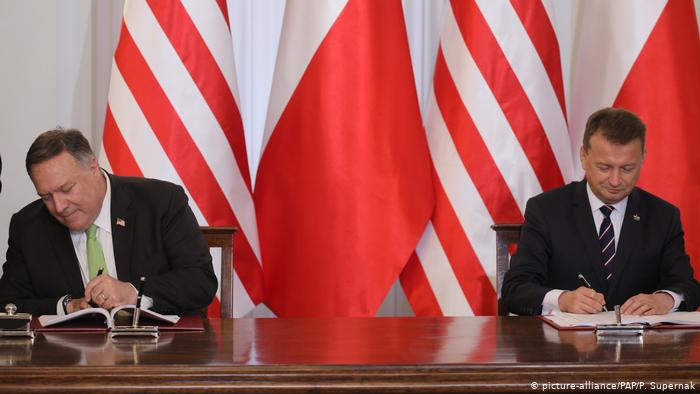 The US has signed a deal with Poland to pave the way for the redeployment of American troops from Germany to the eastern European country. The agreement also makes Poland the new headquarters of the US Army V Corps.

US Secretary of State Mike Pompeo on Saturday sealed an agreement with Poland to boost the numbers of American troops in the eastern EU member state.

Under the pact, another 1,000 US troops will be sent to Poland, in addition to the 4,500 soldiers already stationed there. The deal also grants US access to Polish military installations and allows for the modernization of existing facilities and capabilities in Poland.

"This is going to be an extended guarantee: a guarantee that in case of a threat our soldiers are going to stand arm-in-arm," Polish President Andrzej Duda said during the signing ceremony.

"It will also serve to increase the security of other countries in our part of Europe."

Several military commands will also be moved out of Germany, among them the US Army V Corps overseas headquarters. It will be based in Poland from next year.

Last month, the US Department of Defense announced plans to withdraw around 12,000 US military personnel from Germany, reducing its troop presence there from 36,000 to 24,000. Nearly 5,600 service members will be redeployed to NATO countries, including Poland, with 6,400 to return to the US.

The decision followed repeated complaints from US President Donald Trump that Berlin wasn't spending enough on defense or contributing its share to NATO coffers.

Pompeo and Polish Defense Minister Mariusz Blaszczak signed the deal, known as the Enhanced Defense Cooperation Agreement (EDCA), at the Presidential Palace in Warsaw. The US diplomat is wrapping up a tour of Central Europe, which included visits to the Czech Republic, Austria and Slovenia.