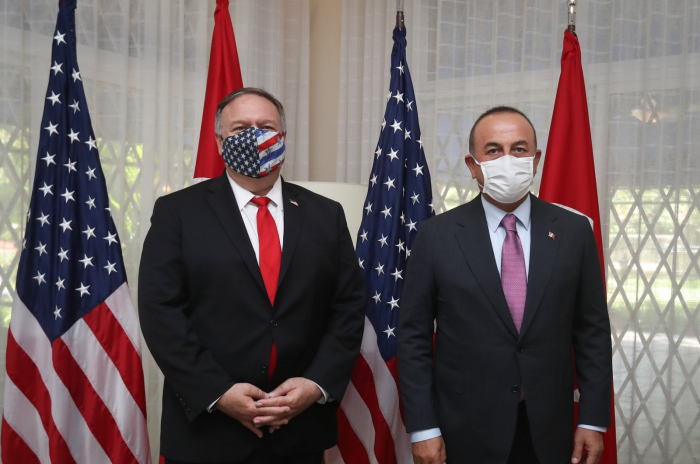 Turkish Foreign Minister Mevlüt Çavuşoğlu and his U.S. counterpart Mike Pompeo discussed reducing tensions in the Eastern Mediterranean and the current situation in Libya at a meeting Sunday in the capital of the Dominican Republic, Santo Domingo, AzVision.az reports citing Daily Sabah.

A written statement by the U.S. Department of State said Çavuşoğlu and Pompeo discussed issues of common concern, including reducing tensions between regional actors in the Eastern Mediterranean, where Turkey is carrying out energy exploration.

Çavuşoğlu said following the meeting that they also evaluated the situation in Libya, agreeing to continue consultations with experts.

Tensions have been mounting in the region after Greece's controversial new maritime pact with Egypt. Greek defense sources announced joint military drills Thursday in the Eastern Mediterranean along with France, which has sought to hem in Turkey's maritime territory.

The drills follow Turkey's resumption of energy exploration in the Eastern Mediterranean on Aug. 10, just after the signing of the Greek-Egyptian maritime pact, which Turkey called illegal. Ankara had temporarily paused the exploration by the MTA Oruç Reis seismic research vessel to allow for diplomatic talks, to no avail.

Turkey has consistently contested the Greek Cypriot administration's unilateral drilling in the Eastern Mediterranean, asserting that the Turkish Republic of Northern Cyprus (TRNC) also has rights to the natural resources in the area.