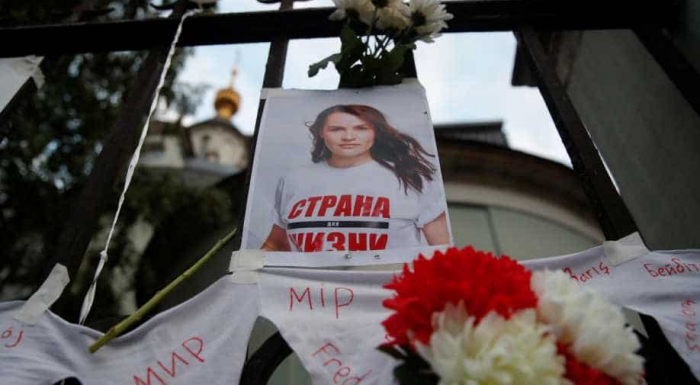 Belarusian opposition candidate Sviatlana Tsikhanouskaya said on Monday she was ready to lead the country, which is gripped by a wave of protests against President Alexander Lukashenko.

"I am ready to assume my responsibilities and act as a national leader", she said in a video from her exile in Lithuania. She added that she did not "want to become a politician" but that "destiny decreed that I would be on the front line in the face of arbitrariness and injustice "

The 37-year-old opponent released this video the day after one of the largest opposition rallies in Belarusian history, which saw tens of thousands of people gather in Minsk to demand the departure of their political leader.

Tsikhanouskaya, who had taken over as a candidate from her imprisoned husband, denounced massive fraud during the August 9 ballot, within which she officially won 10% of the vote against 80% for the outgoing head of state.

Tsikhanouskaya had claimed victory and asked Lukashenko to step down, but had not clearly expressed her readiness to occupy the highest office of the state.

She fled to Lithuania early last week, her allies denouncing the pressures she was subjected to and called for peaceful protests across the country, which have continuned every day since the election.

Another side of the opposition in Belarus says it will file criminal charges for police violence against peaceful citizens today.

The security forces must be held responsible for the brutal mistreatment of demonstrators and prisoners, according to the last remaining opposition figure left in Minsk, Maria Kolesnikova.

At least two people died in the demonstrations. The exact cause of death for both men is unclear. Moreover, local media report that around 80 people are missing.

According to Kolesnikova, 4,000 people are still in custody. Tens of thousands of people called for the release of political prisoners at a protest march on Sunday. They also demanded Lukashenko's resignation.

More than 2,000 prisoners were released on Friday - many of them had severe injuries: bruises, bloody welts on their backs, lacerations on the head and burns from stun grenades. The human rights organisation Amnesty International also saw evidence of torture. The authorities denied allegations of ill-treatment, despite a wealth of photo and video evidence.

Government opponents want to protest against Lukashenko in the next few days. “We will not rest until the current rulers resign and Belarus becomes a free country,” said Kolesnikova. "26 years of nightmare have to end."

Lukashenko appeared in front of supporters on Independence Square in Minsk and had said that he would never give up power.

The 65-year-old wants to meet with striking factory workers today. Strikes in the state-owned companies are seen as a real threat to his retention of power because they threaten to break the country's economic base. Over the weekend, government members and officials from the presidential administration had already tried to persuade people to return to work - without success.

On Twitter, the EU Foreign Affairs Representative Josep Borrell wrote after the protests on Sunday that the European Union was on the side of the Belarusians. EU foreign ministers brought sanctions against the government in Belarus on Friday.

Macron calls for European support for protesters in Belarus

Emmanuel Macron on Sunday called on the European Union to "continue to mobilise" alongside the "hundreds of thousands" of people demonstrating in Belarus against Lukashenko.

"The European Union must continue to mobilise alongside the hundreds of thousands of Belarusians who demonstrate peacefully for the respect of their rights, their freedom and their sovereignty", declared the French president in a tweet.