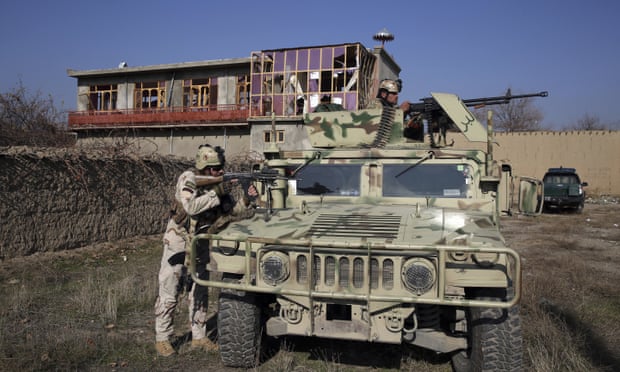 Iran is reported to have paid bounties to a Taliban faction for killing US and coalition troops in Afghanistan, leading to six attacks last year including a suicide bombing at the US airbase in Bagram.

According to CNN, US intelligence assessed that Iran paid the bounties to the Haqqani network, for the Bagram attack on 11 December, which killed two civilians and injured more than 70 others, including two Americans.

The Pentagon decided not to take retaliatory action in the hope of preserving a peace deal the Trump administration agreed with the Taliban in February, the CNN report said. In January, less than a month after the Bagram attack, the US killed the Iranian Revolutionary Guard general Qassem Suleimani, in a drone strike in Baghdad, but that attack is not thought to have been a direct retaliation for Bagram.

“The Department of Defense does not disclose timelines or discussions surrounding internal deliberations and intelligence briefings. With that being said, the department has repeatedly demanded, both publicly and privately, that Iran cease its scourge of malign and destabilizing behavior throughout the Middle East and the world,” a Pentagon spokesman, Maj Rob Lodewick, said.

“While the United States, its Nato allies and coalition partners are working to facilitate an end to 19 years of bloodshed, Iran’s inimical influence seeks to undermine the Afghan peace process and foster a continuation of violence and instability.”

The report comes nearly two months after allegations that Russia was paying bounties to Taliban fighters for killing Americans in Afghanistan. Donald Trump rejected those reports as a “hoax”, but the secretary of state, Mike Pompeo, confirmed he warned his Russian counterpart, Sergei Lavrov, that there would be “an enormous price to pay” if Moscow was paying such bounties. The Pentagon has said it will investigate the reports of Russian bounties but has so far not produced a conclusion to that investigation.