Pashinyan's statements are not based on any historical facts - Historian 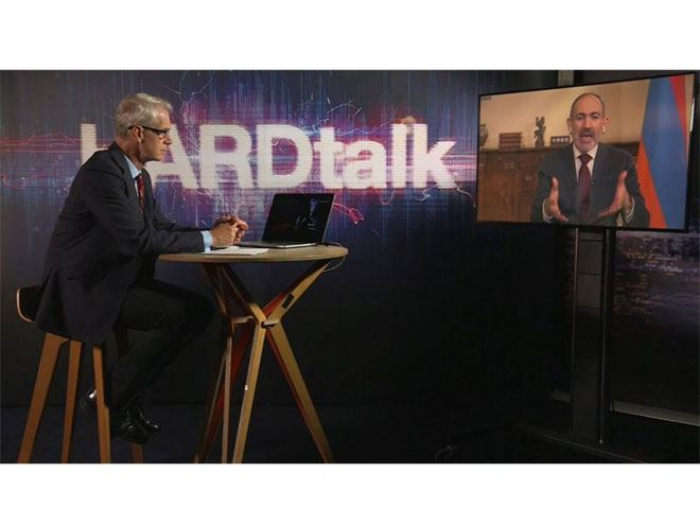 The "Karabakh is Armenia, that’s all!" statement made by Prime Minister of Armenia Nikol Pashinyan during an interview with the HARDtalk program on UK’s BBC TV channel is completely absurd, Gasim Hajiyev, head of Armenian studies of the Institute of Caucasus Studies of Azerbaijan’s National Academy of Sciences (ANAS), historian told Trend.

According to Hajiyev, similarly absurd are his claims that "the Armenian people have been living in Nagorno-Karabakh for thousands of years," and "that toponym Artsakh appeared several thousand years ago".

Noting that Pashinyan's statements are not based on any historical facts, the scientist said that the first Armenian state was created on the Azerbaijani lands in the South Caucasus in 1918 .

He added that studies show that the Armenians did not live in the South Caucasus until the mid-15th century, so they are not aboriginal residents of the region.

"In the 15th century, Armenian priests came to the South Caucasus in search of a place to settle and with the desire to create a state," he said. "Having rented the Albanian monastery called 'Uchmuazzin' (Uch muazzin - 'uch azan' is the Azeri word for three azans), now Echmiadzin [city in Armenia] from Jahan Shah, the ruler of Garagoyunlu (Baharli) in 1441, the priests transferred the Armenian Catholicosate from the city of Sis in Cilicia [historical province in modern Turkey] to this monastery."

"Then Armenian missionaries moved here. Later, the Armenians changed the name "Uchmuazzin" to "Echmiadzin", and the monastery became the religious center of Armenians in the South Caucasus," Hajiyev said adding that this way, the opportunity and conditions were created for the growth of the Armenian population in the region.

The scholar stressed that Armenians who didn’t have their own state, via the leadership of the Gregorian Church, for a long time appealed to the big powers with a request to help them create their own state.

According to the historian, before the occupation of the Azerbaijani territories by tsarist Russia in the first half of the 19th century, no Armenians resided in the South Caucasus outside of "Uchmuazzin".

After the conclusion of the Treaty of Turkmenchay in 1928, under the auspices and with the help of tsarist Russia, 40,000 Armenians were resettled from Iran, where the Qajar dynasty ruled, and 90,000 from Turkey.

"All this is confirmed by official documents. Finally, in the early twentieth century, the city of Irevan was transferred to Armenians as the capital and at the expense of the Azerbaijani lands in the South Caucasus in 1918 the first Armenian state was created", Hajiyev said.

"At the beginning of the 20th century, Armenian separatism in Azerbaijan began with ungrounded territorial claims against Nagorno Karabakh, and in 1923 the Nagorno-Karabakh Autonomous Region was illegally created," he reminded. "At the end of the last century, as a result of the military aggression of Armenia and with the support of a number of anti-Azerbaijani forces, the territory of Nagorno-Karabakh region and seven adjacent districts of Azerbaijan were occupied. These territories still remain under the occupation of the armed forces of Armenia."

He also noted that the Armenians (hays), who are not aborigines in modern territory of Armenia, changed, and distorted the historical and cultural monuments of the local population and destroyed Muslim monuments.

The historian added that both the word "Karabakh" and the word "Artsakh" are of Turkic origin. Since Armenians were unable to falsify the origin of the toponym "Karabakh" ("Kara" - big, "bakh" - garden), they seized on the toponym "Artsakh".

"In fact, Artsakh itself comes from the word 'Arsak'. Unable to falsify the origin of the word Arsak, the Armenians changed it to 'Artsakh'. "The word 'Arsak' has a Turkic origin," he said.

"In the 7th century BC, the Saka kingdom, created by the Saka tribes, existed between the rivers Kura and Araz," he said.

"These tribes were identical to the Turkic tribes, which in the Pahlavi sources are referred to as the Avestan Turs (Turanians). This is the territory of modern Karabakh. The word 'saka' means courageous, brave ", concluded Hajiyev.