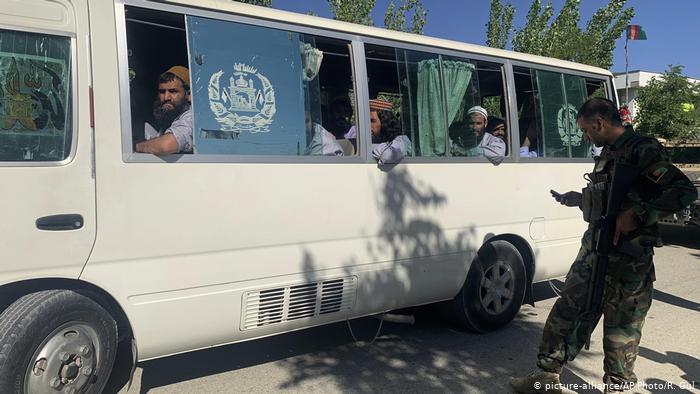 Afghanistan has refused to release more prisoners until the Taliban do, meaning important peace talks set to take place this week have stalled once again. France and Australia are backing Afghanistan's position.

The Afghan government said Monday it would not release the remaining 320 Taliban prisoners, stalling peace talks that are set to go ahead in a couple of days. France and Australia previously spoke out against the release.

Only last week, a traditional council reached an agreement to release a final 400 prisoners. Some of the prisoners set to be releases have committed violent attacks on Afghans and foreigners.

Since then the Afghan administration has released 80 prisoners, but then halted its release program.

The 400 prisoners should have been the last of 5,000 Taliban released by Kabul in return for 1,000 Afghan security personnel held by the militants.

The prisoner swap was agreed earlier this year as a goodwill gesture ahead of US-arranged peace talks set to take place on Thursday.

"There is no plan to release any prisoner today," an official with the country's National Security Council told the AFP news agency.

Why did Afghanistan stop releasing prisoners?

President Ashraf Ghani's spokesman Sediq Sediqqi said that "two countries had shared their concerns and reservations" on about six or seven prisoners among the 400.

"The Afghan government is working with its partners to address the concerns about these prisoners," he told reporters.

While Sediqqi did not name the countries which had taken issue with the move, France and Australia in recent days have objected to the release of several insurgents accused of killing French and Australian nationals and soldiers.

"France asks the Afghan government not to proceed with the release of several terrorists convicted of killing French citizens in Afghanistan," the French Embassy in Kabul said on Twitter.

Sediqqi told AFP the release had stopped due to issues on the Taliban side: "We are going to release them. That's not an issue. But it has to be two-way."

He said the Taliban were not releasing Afghani captives. The Taliban dispute the claim.

Hold-ups have plagued the prisoner swap ever since it and the peace talks were agreed, with both sides accusing the other of not releasing prisoners.

Since signing the agreement, the Taliban have kept a promise not to attack US and NATO troops, but they have carried out regular attacks on Afghan security forces.