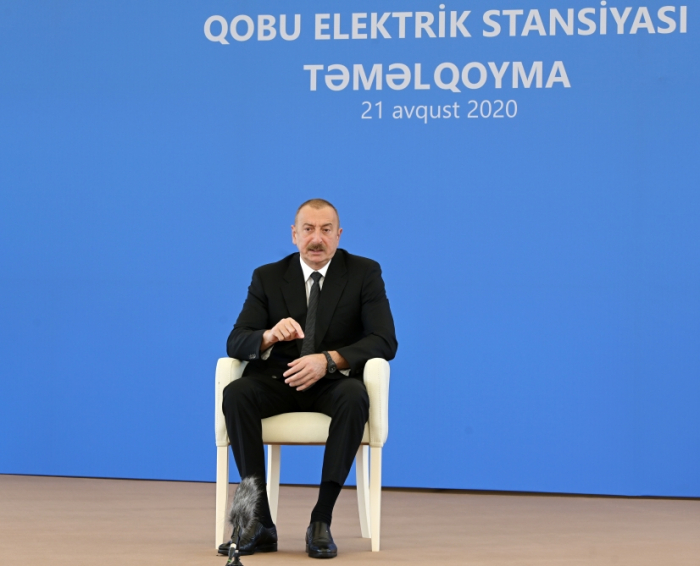 President of the Republic of Azerbaijan Ilham Aliyev viewed the construction of a 330/220/110 kilovolt Gobu substation with a capacity of 1,000 megawatts and laid the foundation of a 385-megawatt Gobu power plant.

AzVision.az presents some excerpts from the President’s speech at the event.

“I believe that the economic situation in Azerbaijan in seven months of this year is satisfactory, the economy has decreased by only 2.8 percent. However, we must also take into account that the oil price has dropped, which has a negative impact on our economic development. At the same time, as a result of the OPEC+ agreement, our production has slightly decreased as well. However, there is growth in industry, including the non-oil industry, and this growth constitutes 13 percent in the first seven months of this year. These are the realities of today's Azerbaijan.”

“We are using and should continue to use our energy potential to the maximum. It is gratifying that the world's biggest energy companies are interested in producing renewable energy in Azerbaijan today, and this interest is already being realized. At the beginning of the year, relevant documents were signed with two large international companies on the construction of solar and wind power plants with a capacity of 440 megawatts.”

“At the same time, I would like to inform local and foreign companies that we are determined to continue our work on the production of traditional energy sources. We are inviting foreign and local investors to build thermal power plants, we want to attract them. We also want to involve them in the construction of hydropower and other renewable energy plants. If there is such an interest, I think that this issue can be resolved in a short period of time.”