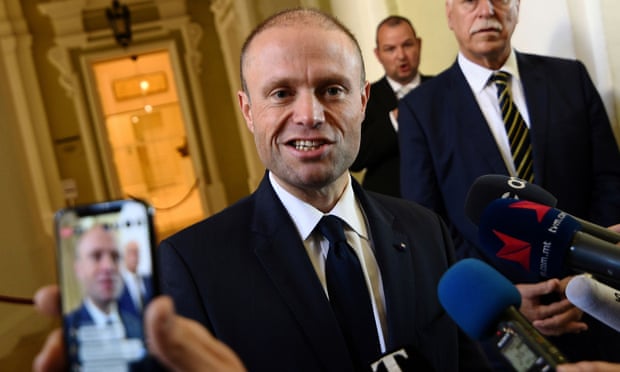 Malta’s former prime minister Joseph Muscat has been questioned by police in connection with the investigation into the murder of the anti-corruption journalist Daphne Caruana Galizia.

Muscat resigned as leader of the EU member state in January after the widening political scandal surrounding the journalist’s death threatened to bring down his government.

The interview on Friday marks the first occasion on which he has been formally questioned by investigators in connection with the case.

In a statement released after he left police headquarters in the capital, Valletta, Muscat said officers had “confirmed to me on the record that I am not under investigation in connection with the case, which was concluded under my watch”.

The decision to question him was prompted by a statement made by the chief suspect, the business magnate Yorgen Fenech, Muscat confirmed.

In June, Muscat denied claims made by Fenech that the two men discussed sensitive details of the case, including the existence of secret recordings made by a middleman, on two occasions while Fenech was under investigation.

“I have today answered questions by the police regarding a statement made by Yorgen Fenech with regards to Daphne Caruana Galizia’s assassination, and which according to the media was given only after Mr Fenech was refused a pardon,” Muscat said. “While I am not at liberty to divulge details, the questions regarded points that are already in the public domain and which I also replied to publicly.”

Fenech’s arrest last year led to the resignation of Muscat’s chief of staff and two of his ministers, and ultimately to the prime minister’s decision to leave government.

The businessman, whose interests range from hotels to casinos and a government-sponsored power project, has pleaded not guilty to charges of complicity to murder Caruana Galizia. He has also denied allegations that he conspired to bribe members of Muscat’s cabinet. Those named in connection with the allegations deny all wrongdoing.

Muscat led his Labour party to a landslide victory in 2013 after two decades in opposition. His term in office was marked by both economic expansion and political scandal. The country’s property and financial services markets boomed thanks to a lucrative “golden passports” scheme – now being wound down – which allowed wealthy investors from Russia, China and the middle east to buy Maltese citizenship and easy access to the EU.

The Labour leader was returned to power in June 2017 despite Caruana Galizia’s revelations that his energy minister and his chief of staff had acquired secretive shell companies soon after entering office. The journalist was assassinated in a car bombing near her home a few months later, in October 2017.

Three men accused of planting the bomb were arrested shortly afterwards. Police suspected Fenech’s involvement in the case as early as 2018, when Muscat signed a warrant ordering the tapping of his phone. However, investigators did not move against the alleged mastermind until late 2019, when he was arrested at sea while sailing away from Malta on board his yacht.