What is the impact of wildfire pollution on our health? 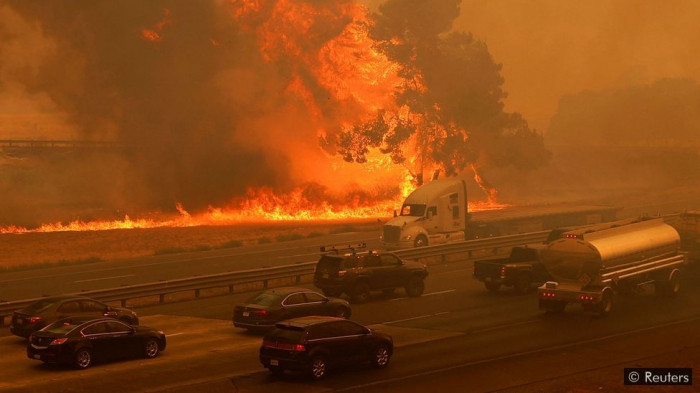 Smoke from burning forests and peat can linger in the atmosphere for weeks, travelling thousands of miles and harming the health of populations living far away.

From far above, they almost look beautiful. Golden yellow tendrils etched across the dark forest landscape below. But in daylight, at close range, the devastation wrought by the fires in the Krasnoyarsk region of Siberia is harrowing.

A wall of blistering flames engulfs the vegetation. Behind it, charred trees stand like blackened toothpicks while columns of smoke choke the air, rising high up into the atmosphere. Since the start of 2020, Russia has seen an estimated 19 million hectares (73,359 square miles) consumed by wildfires, according to Greenpeace International’s analysis of satellite images. Nasa has warned that abnormally warm temperatures in eastern Siberia – particularly in the Sakha Republic, more than 1,250 miles (2,000km) away from Krasnoyarsk – have led to more intense and widespread fires than normal.

The destruction this leads to is undeniable. Swathes of forest and peatland are destroyed. Countless animals caught up in the flames and smoke perish. And when the flames reach areas inhabited by people, they can claim many lives and homes of those unlucky enough to be caught in their path.

In the first few months of 2020, Australia grappled with the worst wildfire season in its history. It claimed the lives of 33 people, destroyed thousands of homes and saw 18 million hectares (69,500 square miles) burned. Three billion animals were killed or displaced. And this August, thousands of lightning strikes triggered hundreds of fires across California, leading to a state of emergency being declared as the flames threatened densly populated residential areas. Beset by a prolonged drought, the state experienced its most destructive and deadliest fires in recorded history during 2017 and 2018.

These impacts on the ground can be hard to bear, but wildfires can have another far-reaching effect on our lives.

Rising up to 14 miles (23km) into the air, well into the stratosphere, plumes of smoke from large wildfires can spread all over the globe thanks to currents of air. Smoke from this summer’s Siberian wildfires has been choking nearby cities for months now and has spread across the Pacific Ocean to reach Alaska. The smoke has even been reducing air quality by creating hazes in cities as far away Seattle.
Story continues below

The Arctic wildfires in Siberia this summer have set a record: for releasing more pollution into the air in a single month than any other in 18 years of record keeping, according to the European Centre for Medium-Range Weather Forecasts.

It is in part down to what’s burning – resin-rich boreal forest, peat buried in bogs and melting tundra permafrost all release high concentrations of carbon dioxide into the atmosphere along with methane and toxic contaminants such as mercury. But it’s also because the fires are more widespread – a byproduct of record-breaking heat waves that gripped the Arctic in early summer. This helped thaw parts of the tundra, making it much more susceptible to burning.

Carried with the gases released by wildfires, however, are also tiny, lightweight particles of soot. Such “particulate matter” (PM) is a common component in air pollution in cities, where it can be released from vehicle exhausts and heavy industry. But smoke from wildfires can lead to dramatic spikes in the amount of particulate matter in the air compared with average air pollution.

For example, during wildfire season in Canada, cities in British Columbia have seen particulate levels that are 20 times higher than would be expected on an average day.

“Wildfire causes episodes of the worst air quality that most people living in high income countries are ever going to see,” says Sarah Henderson, senior scientist in environmental health services at the British Columbia Center for Disease Control. The small size and large amount of particulate matter has a lot to do with this.

Wildfires tend to produce large quantities of finer particulates known as PM2.5 and even finer nanoparticles, which are known to be particularly harmful to human health. This is largely because the tiny particles – which are more 30 times smaller than the width of a human hair and so too small to see – can penetrate the lung membranes when breathed in, damaging the respiratory system and passing into the blood stream.

In the short-term, that can lead to coughing, shortness of breath and exacerbate asthma attacks. During the bushfires at the end of 2019 in Australia, hospital admissions due to breathing problems increased by 34% in the state of New South Wales.

One study estimated that between 2004 and 2009, around 46 million people in the western US were exposed to at least one wave of smoke from wildfires. On days where smoke had caused high PM2.5 levels, there was a 7.2% increase in hospital admissions due to respiratory illnesses. Increases in PM2.5 have also been found to be accompanied by a spike in cases of cardiac arrest.

The potential long-term effects, however, are just as worrying.

Particulate matter has been linked to a range of long-term problems, including increased inflammation, and a greater risk of heart disease and stroke.

But wildfire smoke carries an added danger compared with other particulate pollution. It is filled with reactive chemical compounds that can be carcinogenic, and that can also lead to premature births. These compounds can also stress the body’s respiratory tract, leaving it more vulnerable to deadly respiratory pathogens such as Covid-19. One study found that particulate matter from wildfire smoke was especially harmful to a type of immune cell called macrophages in the lungs. It showed that wildfire particulates were four times more toxic to these immune cells than particulate matter from other air pollution.

Henderson, who’s currently conducting two studies on the long-term health effects of wildfire smoke, says people with pre-existing respiratory conditions are often the most impacted by the smoke. Her work suggests that some may never completely recover after experiencing just one severe wildfire season. Newborn babies, however, may face the most life-altering impacts, because their lungs are still developing and therefore highly vulnerable to smoke toxicity.

Perhaps most alarming is that the toxicity of these smoke particles also appears to increase the further they get from the site of a fire. As they are carried in the wind, the particles undergo chemical reactions in the air that cause them to “age” in a process known as oxidation. This converts the particles into highly reactive compounds that have an even greater capacity to damage cells and tissue than when they were first produced.

A recent study conducted in Greece showed that this process can lead to the toxicity of smoke compounds doubling in the hours after they are first emitted from a fire and that they have the potential to become up to four times as toxic over the following days.

“Even if someone is far away from a fire source, they may still experience adverse health outcomes from the inhalation of highly diluted and oxidised smoke,” says Athanasios Nenes, an atmospheric chemist at the Swiss Federal Institute of Technology Lausanne and the Institute of Chemical Engineering Sciences in Patras, Greece, who led the study. “We have seen that the oxidative potential of wildfire smoke can be up to four times higher when smoke has been atmospherically processed.”

Wildfire smoke can hang in the atmosphere for days, weeks or even months depending on how long the fires burn. One reason it’s able to do that is because the superheated smoke and ash rising into the air can trigger pyrocumulonimbus events, or fire-induced thunderstorms.

These thunderstorms form at least 10 miles (16 km) above the ground in the stratosphere. Here they are moved by the winds and weather in the jetstream, allowing smoke particles to “stay in the stratosphere for weeks, because it's a very stable layer,” says Mike Flannigan, director of the Canadian Partnership for Wildland Fire Science at the University of Alberta.

This also allows wildfire smoke to travel huge distances. Large wildfires can send smoke billowing across whole continents and even oceans. In 2019, smoke from forest fires in Alberta, Canada, was tracked spreading across the Atlantic and into Europe. Smoke from the recent Australian fires was carried by pyrocumulonimbus events over New Zealand, where it impacted air quality and visibly darkened snow on mountains. The smoke even made it to South America.

Experts like Henderson and Nenes fear this spread of wildfire smoke may be exacerbating the harmful health effects of existing air pollution in busy, overpopulated cities. Globally wildfire smoke has been estimated to cause over 339,000 premature deaths a year – far more than those who lose their lives directly in these blazes. It could also be shortening life expectancies for populations that experience fire seasons regularly, Henderson warns.

“It really has an impact if you live under poor air quality conditions,” says Henderson. “If that translates to these populations that are living for four months at a time in these really smoky conditions, you know that's going to have an impact on their life expectancy.”

Wearing masks such as the N95 respirator can help people to protect themselves when they venture outside during wildfire smoke events. Investing in air purifiers with HEPA filters can also help reduce fine particles indoors too, says Henderson.

“If we can keep the indoor air as smoke-free as possible, it will go a long way to protecting people from these exposures,” she says.

But the longer-term impact of wildfires is not just on human health, but the health of the planet as a whole. Burning forests and peat release huge amounts of carbon dioxide and other greenhouse gases into the atmosphere.

“Peat fires are important because it's legacy carbon,” says Flannigan. “It's been built up over thousands of years. And it can be emitted to the atmosphere in a matter of hours or days.” One study estimated that during the 2015 fire season in Indonesia, biomass fires that included a significant amount of peat released the equivalent of 1.5 billion tonnes of carbon dioxide into the atmosphere while fires in 1997 released so much carbon it was equivalent to 13-40% of all emissions from fossil fuels that year.

According to Flannigan, the soil in Russia, Alaska and Canada contains 30 times the amount of peat found in Indonesia’s soil. As climate change causes these Arctic territories to warm twice as fast as the rest of the planet, the risk of more carbon-spewing peat fires will only increase.

If that wasn’t enough, these areas are regularly experiencing so-called Zombie fires, which are slow-burn peat fires that can smoulder just under the ground for months and even years, only to roar back to life when temperatures climb, as happened in Siberia this year.

With climate change bringing warmer, dryer summer conditions, it could lead to a vicious cycle of fire.

Nasa researchers discovered another effect wildfire smoke may be having on the climate. They found the Earth is surrounded by a haze of old smoke hanging in the troposphere over places like Antarctica. It accounts for roughly one-fifth of the aerosols from global fires.

“On a global scale, these smoke particles cool the Earth, but only slightly,” says Gregory Schill, a research associate at the National Oceanic and Atmospheric Administration’s Chemical Sciences Laboratory where the study was conducted. “On a regional scale, however, and in climate-sensitive places like the Arctic, these particles can cause a regional warming effect.”

One reason for this is that black and brown carbon in smoke absorbs heat, causing the air temperature to rise and warm the area below. In areas like the Arctic, this could only exacerbate the problem, creating the conditions that would make wildfires even more likely.

In a world already struggling against wildfires, it is a worrying prediction.