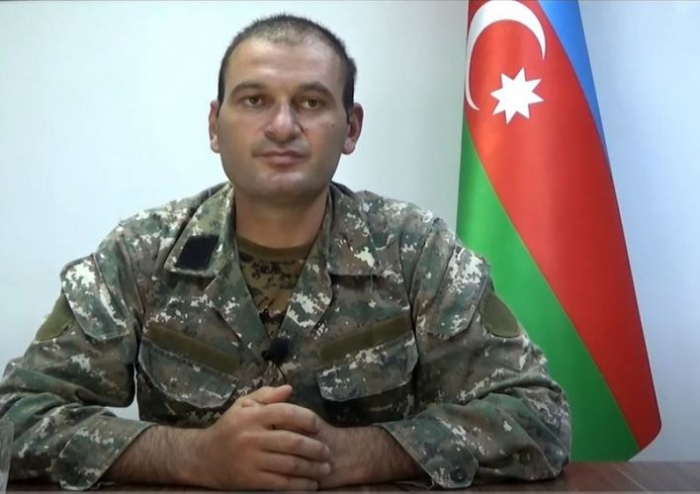 Gurgen Alaverdyan, commander of the Armenian sabotage group, detained on August 23 while trying to commit a provocation in the direction of Azerbaijan’s Goranboy district, provided detailed information about himself and told about the attempted provocation.

Alaverdyan admitted that he serves in the Armed Forces of Armenia and that he was tasked to penetrate the territory of Azerbaijan as part of an intelligence mission.

At about 05:45 (GMT+4) on August 23, the sabotage and reconnaissance group of the Armenian armed forces made an attempt to commit a provocation in the direction of Azerbaijan’s Goranboy district.

As a result of the decisive actions of the units of the Azerbaijani Armed Forces stationed in this direction, the reconnaissance group of the Armenian armed forces was forced to retreat, incurring losses.

During the battle, the commander of the Armenian sabotage group, First Lieutenant Gurgen Alaverdyan (born in 1989) was captured.

The transcript of the video is as follows

Around the end of July 2020, the commander of the military unit, Colonel Vazgen Vartanyan, called a group of officers consisting several scouts including me, as well as, Senior Lieutenant Armen Jamalyan, the platoon commander defending the Hovaz-2 and Omar-2 posts and who are well-aware of the area and chief of the post Grena Hakobyan. On the instructions of the Supreme Command, he ordered to commit sabotage in the combat positions of the Armed Forces of the Republic of Azerbaijan on the line of contact in the direction of Azerbaijan’s Goranboy district using grenades and machine guns, to destroy as many Azerbaijani servicemen as possible, as well as, to prepare for an operation to capture a serviceman.

Thereafter, the group underwent special training for about 20 days, studied the area more thoroughly, selected a position in front of our Hovaz-2 post for the sabotage act and prepared an operational plan in this regard. After that favourable weather conditions were expected to realize the sabotage act. On August 23, 2020 at around 02.30, using the foggy weather, the sabotage and reconnaissance group under my leadership moved in the direction of the positions of the Azerbaijani Armed Forces in Goranboy region on a pre-planned route.

When we tried to enter the territory of the battle post of the Azerbaijani Armed Forces, with the "alarm" signal given by the Azerbaijani military, we realized that we were detected and we had to retreat, and although the other members of the group managed to flee the area, I was captured as I failed to define the direction due to the foggy weather.

I would like to note that I was not willing to continue to serve in the occupied territories of Azerbaijan as an officer of the Armed Forces of the Armenian Republic.

However, as a serviceman, I was forced to serve in this territory.

Expressing remorse for what I did, I would like to mention that like me, a number of servicemen of Armenian Armed Forces have forcibly been involved in service in the occupied territories of Azerbaijan.

Quite contrary to my expectations, upon being captured, I was not subjected to any inhuman treatment, torture or pressure.

Besides, I have no complaints about my nutritional intake and the condition of my detention.

I want to stay in the Republic of Azerbaijan willing to serve this state applying all my knowledge and skills.

I also realized that the Armenian Army has no chance to defeat the Azerbaijani Armed Forces.