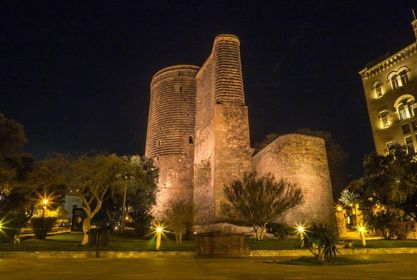 There are many great places to visit in Azerbaijan, but surely one of the most iconic of all is Maiden Tower. Located in the Old City of Baku, the country's capital, Maiden Tower is both a place of magic and legend and an enjoyable modern tourist destination. Built in the 12th century, the tower is one of two Unesco World Heritage sites in Baku, the other being the Palace of the Shirvanshakhs. The tower is a cornerstone of Azerbaijani culture, even appearing on the country’s money and official letterheads.

The history of Maiden Tower

Azerbaijan is a country steeped in history, and Maiden Tower might be its most fascinating historical site of all. The tower’s past is shrouded in mystery, with many local legends regarding its origins. Even the tower’s age is not certain. The main structure is generally agreed to be from the 12th century, but experts believe that its foundations could date back as far as the 4th century. Many believe the tower to have been a fortress, but its exact purpose is also hotly debated.

The Legend of the Fiery Haired Girl

Of the 20 or so legends surrounding the tower, we will list one of them: The Legend of the Fiery Haired Girl. According to the story, the site of Maiden Tower was once home to a Fire Temple. The fortress came under attack and was encircled by enemy troops who demanded that the people of Baku surrender. At the time, the townspeople practised Zoroastrianism, and so the tower's priests prayed to the god for help.

Legend has it that a piece of the Holy Fire fell from the top of the tower and a red headed girl emerged from the flames. She asked for a sword and a helmet and then challenged the enemy commander to one on one combat. It was agreed that, if she won, the enemy would retreat. If she lost, the people of Baku would surrender.

The girl won the fight, injuring the commander in the process. He asked her to remove her helmet and, upon seeing her face, immediately fell in love with her. The pair went on to get married and Baku was saved. The site was named Maiden Tower in the girl's honour.

Whatever the truth about the tower’s past, it has grown into a fabulous modern day tourist attraction. The tower is now home to a fascinating museum, full of information and artefacts which chart the entire history of Baku. After enjoying the museum, visitors can pick up a souvenir from the gift shop, or climb to the top of the tower where they can enjoy stunning views of the city and its bay.

Baku old town is also well worth a visit. Known for its amazing food, nice warm people, and affordable prices, it is the perfect new destination after Covid-19 crisis. Tourists are guaranteed a warm welcome, a good meal, and a whole lot of memories.

Kamran Balayev is a lawyer.