Sign of life found underneath Beirut rubble weeks after blast 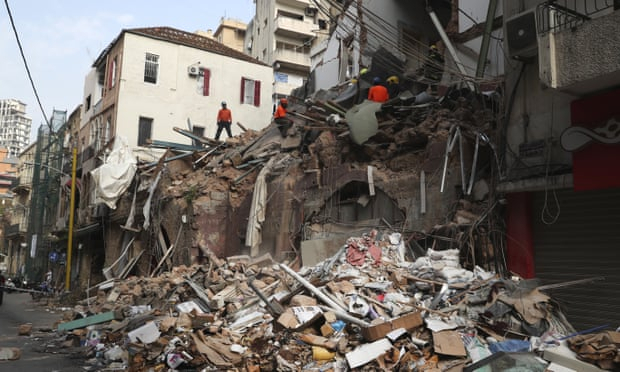 A pulsing signal has been found from under the rubble of a building that collapsed in the Beirut port explosion last month, raising faint hopes that there may be a survivor there, the Guardian reports.

A sniffer dog belonging to a Chilean search and rescue team first detected something in rubble of a building that had previously been searched. The team then used audio equipment to listen for a possible heartbeat, and detected what could be a pulse of 18 to 19 beats per minute.

It is extremely unlikely that any survivors would be found a month after the blast, which killed 191 people, injured 6,000 others and damaged thousands of homes. The past few weeks have been extremely hot in Lebanon, with high levels of humidity.

“99% there isn’t anything, but even if there is less than 1% hope, we should keep on looking,” said Youssef Malah, a civil defence worker. He said his men would continue working throughout the night.

A Chilean volunteer, Francesco Lermonda, said their equipment identified breathing and heartbeats from humans, not animals, and it had detected a sign at the site. He said it was rare but not unheard of for someone to survive under rubble for a month.

As night fell, rescue workers set up lights to work through the darkness. Every now and then, the Chilean team asked bystanders to turn off their phones and stay quiet while they listened for signs of life.

French experts as well as the FBI have taken part in the investigation into the blast at the request of Lebanese authorities. Their findings have yet to be released. Authorities have detained 25 people in connection with the explosion, most of them port and customs officials.

On Thursday, the Lebanese military discovered another four tonnes of ammonium nitrate near the port, the Associated Press reports. According to the military, army experts were called in for an inspection and found 4.35 tonnes of the dangerous chemical in four containers stored near the port. There were no details on the origin of the chemicals or their owner.