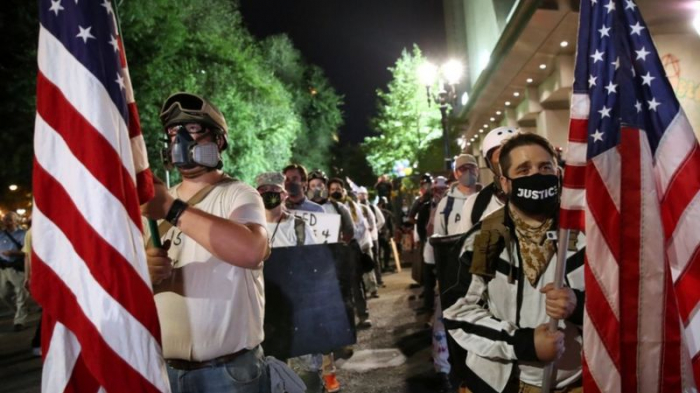 US police have shot dead a man suspected of fatally shooting a right-wing activist during last weekend's tension in Oregon, officials say.

Michael Reinoehl, 48, was being investigated for the killing of a President Donald Trump supporter during anti-racism protests in Portland.

Reinoehl said he had acted in self-defence when he shot Aaron Danielson, a member of the Patriot Prayer group.

It was not immediately clear why officers shot Reinoehl.

Some officers were quoted as saying he had pulled a gun.

One official told the New York Times that a murder suspect in the area - who they could not confirm was Reinoehl - left an apartment and got into a vehicle.

"As they attempted to apprehend him, there was gunfire," Lieutenant Ray Brady told the newspaper.

Black Lives Matter protesters have demonstrated nightly in Portland since the killing of black man George Floyd in May but the city has seen clashes with right-wing groups.

Reinoehl, who regularly attended the protests, had told Vice News that he had thought he and a friend were going to be stabbed by Danielson.

"I had no choice. I mean, I, I had a choice. I could have sat there and watched them kill a friend of mine of colour. But I wasn't going to do that," he said.

What happened at the Portland protests?

Reinoehl was suspected of shooting Danielson during clashes on Saturday night when a large procession of supporters of President Trump clashed with Black Lives Matter protesters.

The shooting came amid fights between the Trump supporters and BLM protesters in the city centre.

Tension rose after a convoy of some 600 vehicles flying flags and carrying an estimated 1,000 Trump backers proceeded through central Portland.

Video showed some people firing what local media described as pepper spray and pellets at BLM groups who had tried to prevent them entering the city by blocking streets.

The city has become a flashpoint for tension with some violence between between far-right groups, such as Proud Boys and Patriot Prayer, and left-wing counter-demonstrators known as antifa, or anti-fascist movement.