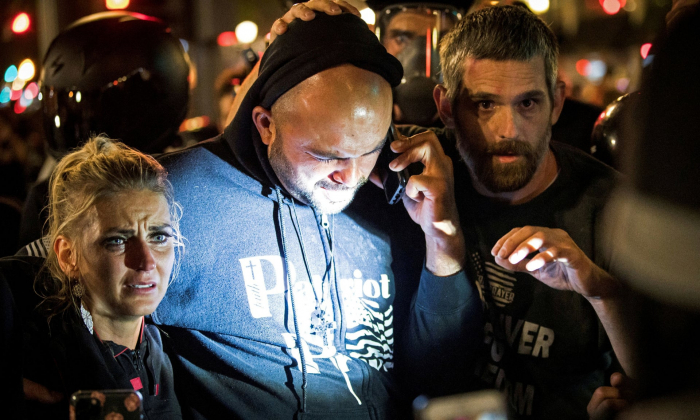 Facebook has deleted the pages of US right-wing group Patriot Prayer and its founder Joey Gibson, a company spokesman said, as part of efforts to remove “violent social militias” from the platform, the Guardian reports.

Patriot Prayer has hosted dozens of pro-gun, pro-Trump rallies and attendees have repeatedly clashed with leftwing groups around Portland, Oregon, where one supporter of the group was killed this week.

The victim, 39-year-old Aaron Danielson, was walking home on Saturday night after a pro-Trump demonstration in the city when he was shot.

The company updated its policies last month to ban groups that demonstrate significant risks to public safety. Its dangerous organisations policy now includes groups that celebrate violent acts or suggest they will use weapons, even if they are not directly organising violence.

“Antifa groups murdered my friend while he was walking home, and instead of the multibillion dollar company banning Portland Antifa pages, they ban Patriot Prayer, Joey Gibson and several other grandmas that are admins,” he wrote.

Antifa is a largely unstructured, far-left movement whose followers broadly aim to confront those they view as authoritarian or racist.

Gibson espouses non-violence but is accused by anti-fascist groups of provoking confrontations. After the shooting of Danielson he cautioned supporters not to seek revenge, but rather “push back politically, spiritually”.

As of earlier this week, the Patriot Prayer page had nearly 45,000 followers on Facebook. It was created in 2017.

Facebook last week removed content associated with the Kenosha Guard, a group that had posted a “call to arms” in Kenosha, Wisconsin.

The company acted the day after two people were shot and killed at protests in the city, which broke out in response to the police shooting of a Black man earlier that week.

Facebook designated the shooting a “mass shooting” – a ruling that invoked the company’s ban on praise, support, or representation of a mass shooter or the shooting itself. And yet those types of posts continued to be spread widely on the platform despite the ban, according to a Guardian analysis of CrowdTangle data.