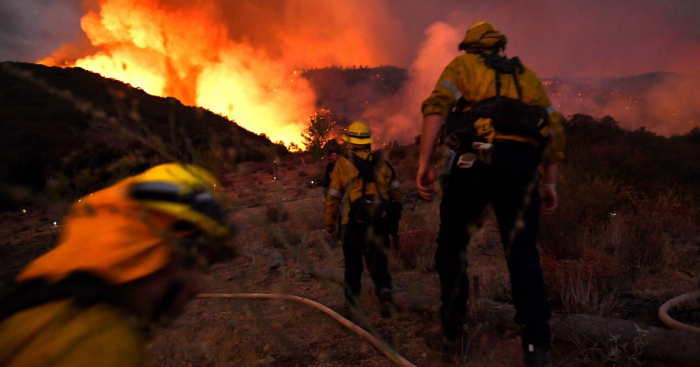 A major rescue operation is taking place in California after a wildfire trapped people at a popular reservoir.

Helicopters have brought out dozens of people so far from around the Mammoth Pool Reservoir, about 40 miles (60km) north-west of Fresno.

Rescuers are returning for others and say the number trapped is unknown. So far two people are seriously injured and 10 more have moderate injuries.

The fast-moving Creek Fire started at about 18:45 on Friday.

It grew to cover about 5,000 acres of the Sierra National Forest - an area of steep and rugged terrain - by Saturday afternoon, the LA Times reported.

A tweet from the Fresno County Fire Protection District just before midnight local time (0700 BST) said 63 people had been rescued by military helicopter and taken to Fresno Yosemite International Airport.

It read: "Aircraft are returning to continue rescue operations, Unknown how many more."

The rescue comes as some areas of California are experiencing a record heatwave.

Governor Gavin Newsom on Friday declared a state of emergency amid warnings that power cuts could be implemented on a rotating basis to meet excessive demand.

Temperatures of up to 49C (125F) are expected to last through the Labor Day holiday weekend.

The National Weather Service (NWS) said there could be "rare, dangerous and very possibly fatal" temperatures across parts of southern California.