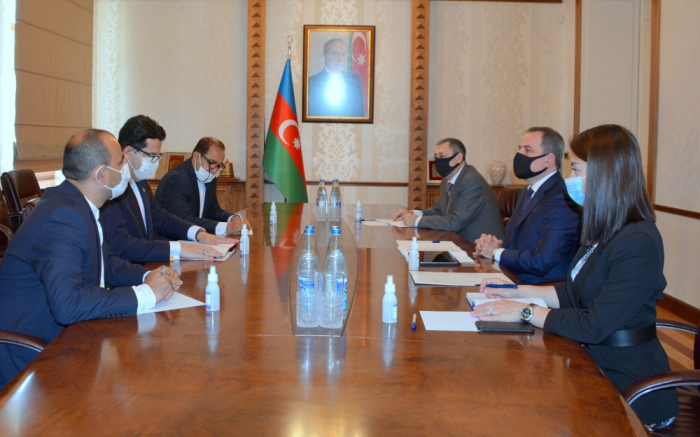 Azerbaijan`s Foreign Minister Jeyhun Bayramov has met with the newly appointed Ambassador of the Islamic Republic of Iran to the country Seyyed Abbas Mousavi.

The Iranian Ambassador presented a copy of his credentials to FM Bayramov.

The Azerbaijani FM congratulated Seyyed Abbas Mousavi on his appointment as Ambassador to Azerbaijan and wished him successes in his future activities.

The sides discussed the successful development of bilateral relations between Azerbaijan and Iran in the spirit of mutual respect and support based on the principles of friendship, brotherhood, and cooperation that has deep historical roots, and exchanged views on the fruitful implementation of the issues on bilateral agenda. The issues of further successful cooperation within multilateral platforms were also discussed.

Seyyed Abbas Mousavi underlined that he will spare no efforts to further develop relations between the two countries during his diplomatic tenure. The ambassador conveyed the sincere wishes and congratulations of Minister of Foreign Affairs of Iran Mohammad Javad Zarif to Minister Jeyhun Bayramov. The Iranian ambassador stressed that there is great potential for deepening bilateral relations.

FM Bayramov noted the continued aggression by Armenia against Azerbaijan and thanked Iran for supporting Azerbaijan`s fair position on the settlement of the Armenia-Azerbaijan Nagorno-Karabakh conflict based on the norms and principles of international law.

Ambassador Mousavi emphasized Iran`s support for the position of Azerbaijan with regard to the conflict and the occupied territories of Azerbaijan and the readiness of his country to provide assistance in the settlement of the conflict.