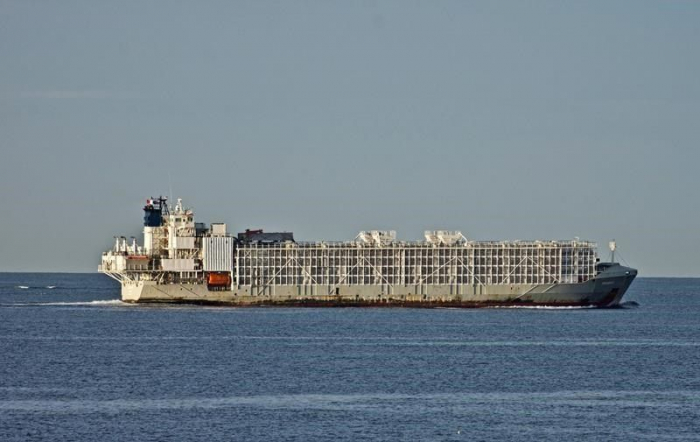 Japanese coast guard ships resumed searching on Tuesday for a livestock ship and its 40 missing crew members off Japan's southern islands after the efforts were suspended due to a typhoon.

The Gulf Livestock 1 sent a distress signal early Sept. 2 while it was sailing in stormy conditions in the East China Sea as a typhoon passed the area. Two survivors were rescued and the body of a third crew member was recovered before a second typhoon halted the search.

The aerial search had resumed late Monday. Coast Guard officials said two patrol ships were back at sea Tuesday after the waters calmed.

Rescuers have seen dozens of cows carcasses, an empty raft, a life vest carrying the ship’s name and a bundle of rope floating in the area. They also found traces of fuel in the water, a sign of the ship’s submersion.

The first survivor, a chief officer from the Philippines rescued last Wednesday, told Coast Guard officials that the ship stalled when an engine stopped, then capsized after being hit broadside by a powerful wave and sank. A second survivor, a Filipino deckhand, was rescued Friday while floating in a raft.

The total crew included 39 from the Philippines, two from New Zealand and two from Australia. The body of the crew member who died has not been identified.

The ship’s operator, Dubai-based Gulf Navigation Holdings PJSC, owns and operates chemical tankers, livestock vessels and other ships. It issued a statement last week praying for more survivors among the crew and expressing regret for the lost livestock.

The Philippine Department of Foreign Affairs earlier said the country was co-ordinating with the ship owner and the Japanese coast guard and it remained hopeful other Filipino crew members would be found.