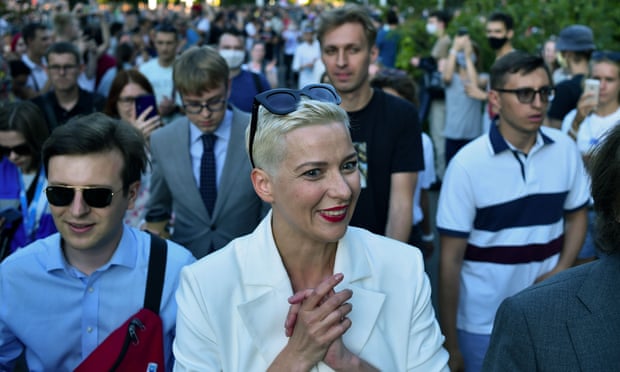 The Belarusian opposition figure Maria Kolesnikova ripped up her passport in order to avoid being deported from her own country, the Guardian reported.

On Monday, masked men kidnapped Kolesnikova from the centre of Minsk and drove her away. Two of her opposition colleagues also vanished. The three activists were later driven to the Alexandrovka border with Ukraine in a car that arrived at about 4 am on Tuesday.

Kolesnikova refused to cross the border and deliberately ripped up her passport, according to local sources. “When attempting to deport her, she tore her passport and could not be allowed into the territory of Ukraine by border guards,” a source told Interfax-Ukraine agency.

Russian President Vladimir Putin has promised to send a contingent of special forces to Belarus to prop up Lukashenko if necessary and is due receive the embattled Belarusian leader in Moscow for talks in the coming days.

Roman Babayan, one of the Russian journalists at the interview, wrote on Telegram that Lukashenko said he will not step down, saying his supporters would be attacked. He ruled out dialogue with a coordination council, set up by the opposition, of which Kolesnikova is one of a seven-person praesidium. Authorities have been systematically targeting its leaders in recent weeks.

Ukraine’s deputy interior minister, Anton Gerashchenko, posted on Facebook that Kolesnikova had successfully prevented “a forcible expulsion from her native country”. “It wasn’t a voluntary trip,” he wrote, calling Kolesnikova “this brave woman”.

The activists with her – Anton Rodnenkov and Ivan Kravtsov – were in Ukraine, officials in Kyiv confirmed. The Belarus state Belta news agency said Kolesnikova was pushed out of the car, which continued without her across the Ukraine border. Belarusian guards then appear to have recaptured Kolsenikova. The exact sequence of events at the border and her whereabouts were unclear.

“Kolesnikova has now been detained. I can’t say concretely where she is, but she has been detained,” Anton Bychokovsky, a Belarus border guard spokesperson told Reuters. “She was detained in connection with the circumstances in which they [the group] left the territory of Belarus.”

Kolesnikova was a campaign partner of the opposition candidate Svetlana Tikhanovskaya, who claimed victory against the longstanding president, Alexander Lukashenko, in disputed elections on 9 August.

She was seized on Monday along with at least three other members of the coordination council, which was set up to seek a peaceful transfer of power amid widespread rejection of the official election results, which gave 80% of the vote to Lukashenko.

Speaking to the Guardian before her kidnapping, Kolesnikova said her civic actions were not part of a political programme. “I just want to do it as a citizen,” she said. She mentioned harassment from the authorities including being followed and minibuses “lurking outside” her campaign headquarters.

Kolesnikova added: “I am not paying attention because if I was going to pay attention I would have left [Belarus] three months ago. I made a decision in May [to stay]. I have no illusions about the kind of country in which I’ve made that decision.”

Germany and Britain have demanded answers over Kolesnikova’s whereabouts. The British foreign secretary, Dominic Raab, tweeted: “Seriously concerned for the welfare of Maria Kolesnikova in Belarus. Lukashenko’s regime must make her safe return their highest priority. The regime must cease brutalising protesters, release political prisoners and begin dialogue with the opposition.”