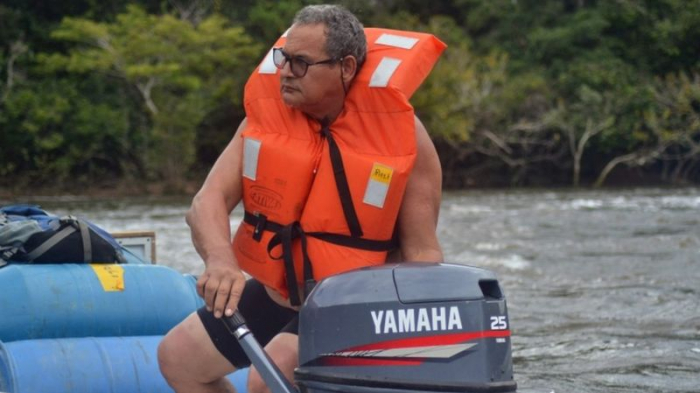 A top Brazilian expert on isolated Amazon tribes has been killed by an arrow that struck him in the chest as he approached an indigenous site.

Rieli Franciscato, 56, died on Wednesday in a remote region of Rondônia state in north-western Brazil.

He was in the area to monitor a tribe as part of his work for the government's indigenous agency, Funai.

An NGO founded by Mr Franciscato described him as an "excellent, serious and dedicated professional".

The Kaninde Ethno-Environmental Defence Association, which he helped create in the 1980s, said the indigenous group had no ability to distinguish between a friend or a foe from the outside world.

What happened to Mr Franciscato?

Witnesses said Mr Franciscato and his party came under fire as they approached an indigenous group.

Mr Franciscato, who was accompanied by police, attempted to take shelter behind a vehicle, but was struck in the chest by an arrow, witnesses said.

A policeman who witnessed the incident said Mr Franciscato managed to remove the arrow, which hit him above the heart.

"He cried out, pulled the arrow from his chest, ran 50m (164ft) and collapsed, lifeless," the officer said in an audio recording posted to social media.

A photojournalist in the region, Gabriel Uchida, told AFP news agency that Mr Franciscato had been trying to observe a tribe known as the "Cautario River isolated group".

Mr Uchida, who also witnessed the incident, said the tribe was usually "a peaceful group", but "this time, there were just five armed men - a war party".

In 2018, US missionary John Allen Chau was killed by a tribe in India's Andaman and Nicobar Islands, who shot him with arrows and left his body on the beach.