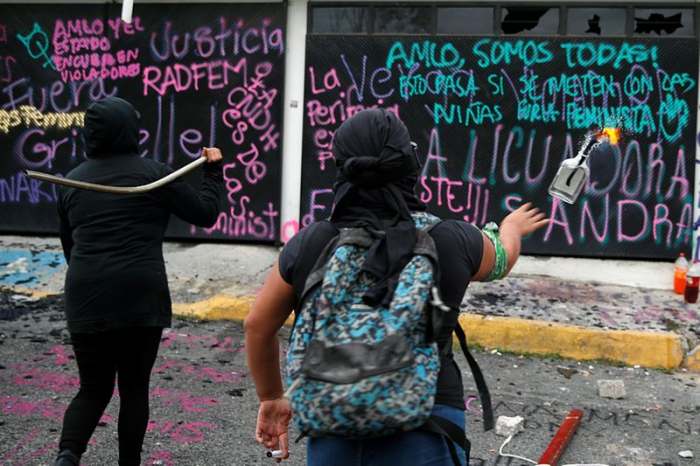 Mexican activists protesting violence against women set part of a building belonging to a government rights commission on fire in central Mexico on Friday.

After spraying the building with graffiti, roughly 25 masked women broke down a door, entered the building and started a fire inside, a Reuters witness said.

The women then left the building and hurled molotov cocktails at its exterior walls, according to the witness.

Thirteen women were arrested by police, the State of Mexico government said. They were later released after an outcry on social media about their apparent rough treatment.

Demanding justice for murdered women in cases that have not been solved or even properly investigated, activists have also occupied the main offices of the countrys federal human rights commission in Mexico City over the past week.

Intense media coverage of the protests have helped reignite debate about topic and spurred demonstrations in other cities across the country. The protests have also focused on Mexico's more than 73,000 missing people.

Femicides, the murder of women due to their gender, rose 5.4% between January and July in Mexico from the same period last year, according to official data. In July alone, 74 women were murdered.

The federal rights commission has urged authorities to not hurt protesters.

The governor of the State of Mexico, Alfredo del Mazo, said on Twitter he condemned the actions of the police on Friday and promised an investigation into the incident.

State government prosecutors said in a statement that protocols had been followed in the arrest of the 13 women.