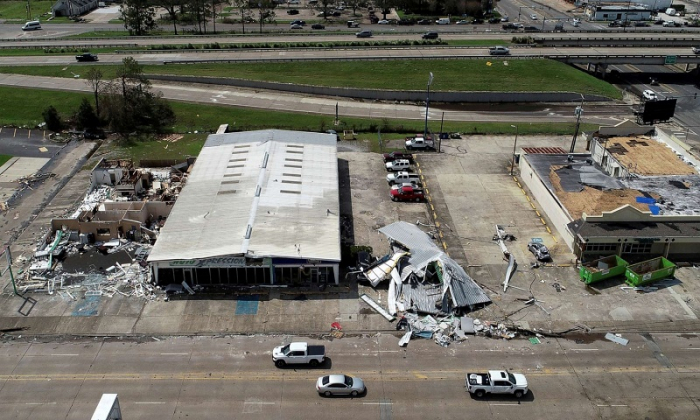 A newly formed hurricane is closing in on the US Gulf Coast, threatening several southern US states including Florida, Mississippi and Alabama.

Hurricane Sally grew to a category two storm on Monday and was expected to make landfall early on Wednesday.

The hurricane will bring more than 1ft (30cm) of rain and 85mph (135km/h) winds to some areas, with the potential of deadly storm surges, officials say.

This year's hurricane season has been particularly active.

For only the second time in recorded history, there are five tropical storms churning in the Atlantic basin at the same time.

Louisiana Governor John Bel Edwards, whose state is still recovering from Hurricane Laura last month, tweeted on Monday to warn residents to "be smart and be safe".

Alabama and Mississippi each declared states of emergency in anticipation of the hurricane, which at 21:00 GMT on Monday was located 145 miles south-east of Biloxi, Mississippi, and moving towards land at a rate of 6mph.

Mississippi Governor Tate Reeves said Sally was expected to make landfall near Biloxi at about 02:00 (06:00 GMT) on Wednesday.

The National Hurricane Center (NHC) said the storm had shifted and was not expected to directly hit Louisiana, but could still cause storm surges that could trigger major floods.

"Additional strengthening is forecast tonight and early Tuesday and Sally is expected to be a dangerous hurricane when it moves onshore," the NHC warned.

In New Orleans, residents who live outside the city's levee protection system have been ordered to evacuate their homes.

As of Monday, almost 80,000 homes in Louisiana were without power as a result of Hurricane Laura, which hit three weeks earlier.

In addition to Sally, there are four other tropical cyclones - Paulette, Rene, Teddy and Vicky - swirling in the Atlantic Ocean basin.

If only one more storm is officially named - Wilfred has already been chosen - meteorologists will begin naming new storms after the Greek alphabet.

Climate change experts attribute the pace of major hurricane development this year - as well as the severity of wildfires currently sweeping the US West Coast - to the effects of climate change.