Why plastic-surgery became popular during the lockdown 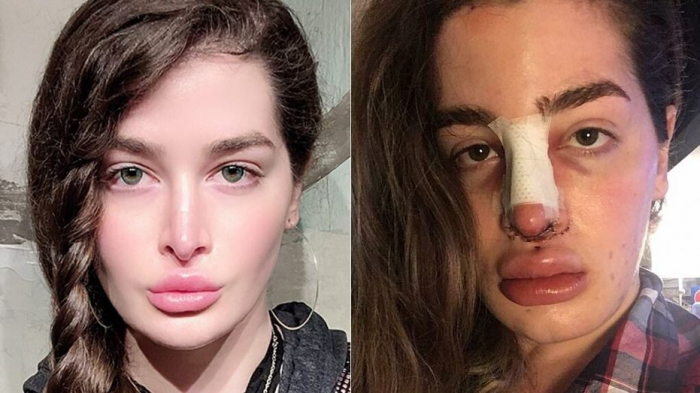 Lockdown and remote work have meant hours of staring at our own faces on video calls – and prompted interest in going under the knife.

As much as we may now be trained to sit on video calls and stare at our colleagues through a computer screen, many of us find ourselves constantly distracted during our daily huddles and meetings. It’s not the dog barking in the background, or the roommate making lunch over someone’s shoulder – it’s the sight of our own faces.

And the longer that video thumbnail stares back at us, the more we start to notice things. Were those crow’s feet there before lockdown? Did my nose suddenly get bigger? Is one eyebrow higher than the other?

It’s little surprise that after months of conducting conversations via video call, many of us have started to analyse – and criticize – our appearances more. Cosmetic doctors and plastic surgeons around the world – Australia, the US, the UK, Japan, South Korea – have reported surges in bookings for surgical and non-surgical treatments following lockdown. It’s being referred to as the ‘Zoom Boom’.

“‘Lockdown Face’ has become a thing,” says Ashton Collins, director of Save Face, a UK government-approved register of accredited cosmetic practitioners. “We were inundated with queries saying, ‘I’ve noticed that my frown line is terrible, that my lips need doing, or my nose is crooked’.” Since the UK lockdown began in March, Save Face has seen a surge of 40% more traffic to its website, with people researching treatments, then going onto the register to find local practitioners.

What is it about pandemic video calls that have us scrutinising our every feature – and just how rational is it?

And these procedures are pricey. Americans spent more than $16.6bn (£12.76bn) on cosmetic plastic surgery in 2018, according to the American Society of Plastic Surgeons, with an average facelift costing almost $8,000 (£6,151). So, when the pandemic hit, some cosmetic doctors felt extreme uncertainty about what lockdown would mean for their industry, especially with disposable household income falling as well as the inability for patients to see doctors in person.

However, the British Association of Aesthetic Plastic Surgeons (BAAPS) says its doctors were reporting up to 70% increases in requests for virtual consultations during this period, as patients continued to consider treatments they’d be able to get once they could see their surgeon face to face again. Similarly, a recent survey by the American Society of Plastic Surgeons showed that 64% of its doctors had seen an increase in their virtual consultations since the start of Covid-19.

Injectables were the most-asked-for treatments, followed by more invasive procedures, such as breast augmentation and liposuction. By and large, UK-based practitioners say that the Zoom Boom is driving interest in non-invasive facial procedures, like Botox, fillers or skin resurfacing that correct lines caused by the facial expressions we notice on video calls as well as to tackle wrinkles. There’s also a surge in demand for ‘neck rejuvenation’ and ‘jawline contouring’, as people spend more time looking down into their computer’s camera and focussing on those areas of their body.

And although women historically account for a far larger proportion of cosmetic procedures than men, the Zoom Boom isn’t just for women. Dr Munir Somji, a cosmetic doctor who works at London’s Dr MediSpa Clinic, says he’s received an increase in men requesting hair transplants, due to the time they’ve spent looking at their hair on video calls. “When you’re looking at a Zoom call and you’re in a well-lit room, your hair’s going to look thinner no matter what you do. And for men during lockdown, if they weren’t able to cut their hair, then it also looks thinner when it’s slightly longer,” he says.

But Dr Jill Owen, a psychologist from The British Psychological Society, warns the version of ourselves we see on our screens can be deceiving and distort reality. “The angle, lighting and limitations of the camera on many devices can lead to distortions of features – meaning, the image can be unfamiliar to the video caller, and very different to the picture they are used to each time they look in a mirror,” she explains.

Obsessing over our own image can lead to “perceptual distortion”, she says, which occurs when we “highlight a fault, then focus disproportionately on this until it becomes magnified” in our perception. Owen adds that devices such as smartphones can further alter body image, due to the angles at which we hold them.

Seeing oneself on-screen over and over again encourages people to obsess over body image and perceived flaws. It’s a common refrain from actors who see themselves on TV and in films for years, and who must conform to the industry’s unrealistic beauty standards. Now, the rise of social media and selfie culture means the phenomenon isn’t limited to stars; for instance, look to ‘Snapchat dysmorphia’, which, like the Zoom Boom, also sparked an increased demand in plastic surgery. Many studies in the last few years have linked selfie-taking and social media with body dysmorphia and negative self-esteem and self-image.

In that way, the Zoom Boom is just a continuation of a trend that’s been happening for years. “Essentially, it’s the same problem,” says Collins of Save Face. “Before it was ‘Selfie Dysmorphia’, and I think now it’s less about photos, and more about video calls. You see yourself in a certain way, and you scrutinise that and become obsessed with certain things.”
Obsessing over our own image can lead to perceptual distortion, which occurs when we highlight a fault and then fixate on it disproportionately
And with Zoom calls, not only are you staring at your face at a particular angle for hours on end, but you’re also looking at other people’s faces and comparing yours side-by-side in real time, says Gordon Lee, a plastic and reconstructive surgeon at Stanford University in California. “Celebrities have to look good in front of people,” he says. And now, for many amid the Zoom Boom, “so do regular people”.

The ‘pressure cooker’ of quarantine

The specific environment of pandemic-induced lockdown also contributes to the cosmetic-surgery Zoom Boom. For example, lockdown has given people more time to think and research treatments – especially if they had been considering getting a procedure done regardless of the pandemic. Lockdown makes it easy for people to stay at home as they heal, and they can also conceal their face behind a mask when in public. Some have reported an urgency to get treatments done more quickly in case we go into lockdown again.

But there are additional psychological factors, too. “Lockdown video calls have been occurring in contexts that, for many, have lacked other forms of social interaction and stimulation. The impact of the calls and subsequent negative thoughts can assume more significance than they might during a busy, active life,” says Owen. “In addition, if Covid and lockdown issues have led to lowered mood for some people, they may then be more prone to negative thinking or less favourable evaluations of themselves.”

London-based therapist Jodie Cariss is the Founder of Self Space, a private mental-health service where people can self-refer for sessions with qualified therapists. She says when working with clients with self-image issues who may be considering cosmetic surgery, she asks questions about what else is going on in their life, as it may be a symptom of a deeper underlying issue.

“I wonder about this experience [lockdown] highlighting people’s distress and unhappiness. So, I wonder if it might have been a bit of a pressure cooker for people and so we might see symptomatic behaviour coming out the other side,” she says. “I think things that we felt we had control over before suddenly might feel out of control, which brings to the surface other neuroses that we might have used as a kind of defence method before.”

Although it’s impossible to know if the Zoom Boom will go bust after Covid-19, there’s still a timelessness to plastic surgery’s appeal that is likely to go endure. “Plastic surgery is such a big part of our culture,” says Stanford’s Lee, who stresses the importance of going to qualified professionals and being responsible with why people choose to opt into having work down.

“The concept of beauty has been so invasive. It’s on TV, and we admire celebrities and social media stars, many of whom who have had cosmetic surgery,” he says. “It’s not realistic to look at the supermodel in a magazine – but all of us look at it, we admire it. We envy it. We want to be that.”