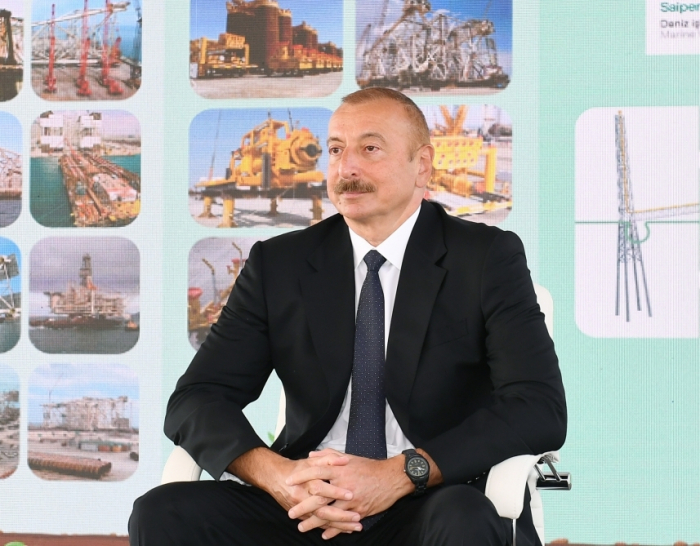 As reported earlier, on September 19, President of the Republic of Azerbaijan Ilham Aliyev attended a groundbreaking ceremony for the Absheron field offshore operations at the Heydar Aliyev Baku Deep Water Jackets Plant.

Here are some excerpts from the interview of President Ilham Aliyev:

“In the last years of the Soviet Union, great injustices were committed against Azerbaijan. In particular, the executioner of the Azerbaijani people Gorbachev and his gang hated Azerbaijan – in fact, not only Azerbaijanis but also all the Muslims. I know for sure that they had a strong feeling of hatred. As a result, the Armenians revolted and demanded that Nagorno-Karabakh be separated from Azerbaijan and joined to Armenia. This happened just two weeks after Heydar Aliyev was removed from the Politburo. The Heydar Aliyev factor did not allow them to raise their head. However, Gorbachev's immediate entourage consisted of Armenians and no action was taken against this baseless claim. On the contrary, at that time Gorbachev's government sided with the Armenians by 100 percent and first steps were taken to separate Nagorno-Karabakh from Azerbaijan.”

“At that time, the Soviet government decided to establish a special committee in Nagorno-Karabakh, and Gorbachev's aide Volsky was appointed to that committee. Volsky was a staunch pro-Armenian, and while he was working there, he did his best to erase Azerbaijan's historical heritage from Nagorno-Karabakh. Unfortunately, the Azerbaijani leadership at that time treated these processes only as a spectator, did not raise its voice and did not speak up. They acted very cowardly and did not want to spoil relations with the center. The people who governed Azerbaijan at the time betrayed the Azerbaijani people.”

“Azerbaijan has made an invaluable contribution to the victory of the Soviet Union in World War II – both here in the rear and at the front. A ceremony to liberate the Sambek Heights was recently held in the Rostov Region of Russia. I am very grateful to the governor of Rostov where the heroic work and selflessness of Azerbaijanis have been recognized. At the same time, Russia's state television, Rossiya-1, interviewed me on this issue. Because it was the Azerbaijanis who cleared the Sambek Heights and the Rostov Region from the Nazis, the 416th Taganrog Division... They cleared Rostov from the Nazis, did not allow the Nazis in Mozdok to cross into Baku. We did that, the heroic people of Azerbaijan did. Azerbaijani officer Majidov planted the Victory flag on the Brandenburg Gate. But is this in the history books? No! Whoever you ask, most people don't know. Why? Because this history was erased. The heroism of the Azerbaijanis was erased from history.”

“At that time, those living in Moscow – Mikoyans and similar anti-Azerbaijani elements – bent over backwards to conceal the heroism of the Azerbaijanis. Mehdi Huseynzade is a legendary partisan who was given the title of a Hero of the Soviet Union at the insistence of the Azerbaijani side years after the war. While in Slovenia, I visited his grave. We held a big ceremony there. There I saw Slovenians fighting with him. They were crying. I talked to them because their impressions were very interesting. They were saying that there was no such hero elsewhere in the world. In other words, this was concealed and deliberately hushed up.”