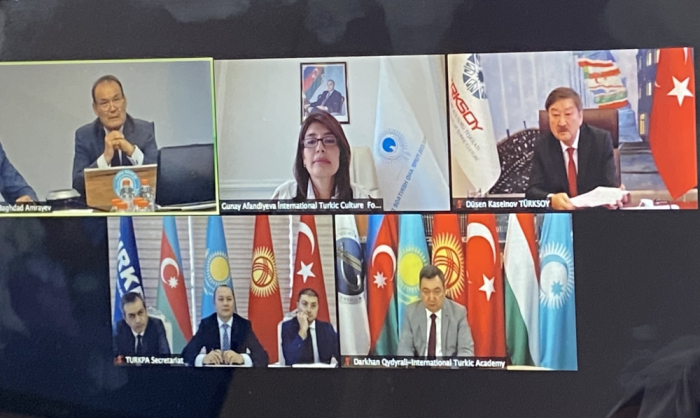 "The International Turkic Culture and Heritage Foundation conducted research on the destruction of historical, cultural and religious monuments of Azerbaijan in the regions occupied by Armenia, and we plan to present them in the near future," said president of the International Turkic Culture and Heritage Foundation Gunay Afandiyeva as she addressed a meeting in a video format of the Coordination Committee of the Cooperation Organizations of Turkic-Speaking States.

The meeting discussed issues related to the activities of international organizations during the pandemic, ensuring coordination between Turkic Cooperation Organizations, programs and projects planned for 2020 and subsequent years, as well as other issues.

Speaking at the meeting, Gunay Afandiyeva noted the events organized during the pandemic to study, protect and promote the Turkic cultural heritage on an international scale, and also informed about future plans of the International Turkic Culture and Heritage Foundation.

Pointing to the Nagorno-Karabakh conflict, Gunay Afandiyeva expressed concern about the repeated violations of the ceasefire regime by Armenia on the Azerbaijani-Armenian border. She noted that in connection with the events that took place in July this year as a result of Armenia's aggressive policy, the International Turkic Culture and Heritage Foundation made an immediate statement.

The meeting ended with an exchange of views between the heads of the Turkic Cooperation Organizations.