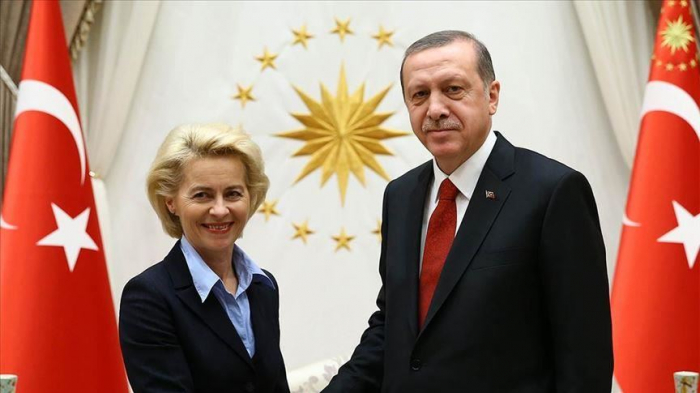 The Turkish president on Wednesday held a video conference with the head of the EU Commission to discuss Turkish-EU relations and regional developments, according to the country's Communications Directorate, AzVision.az reports citing Anadolu Agency.

President Recep Tayyip Erdogan told Ursula von der Leyen that maximalist claims by Greece and the Greek Cypriot administration were at the core of tensions in the Eastern Mediterranean, with both ignoring the rights of Turkey and the Turkish Republic of Northern Cyprus (TRNC).

Stressing that Turkey has always called for dialogue since tensions erupted recently in the Eastern Mediterranean, Erdogan said his country is ready for exploratory talks with the Greek side and expressed hope that Greece would not miss an opportunity for diplomacy once again.

He went on to say that steps towards renewing the 2016 migration deal between Ankara and the Brussels, as well as updating the customs union between them and ensuring visa liberalization for Turkish nationals traveling to EU countries would help improve bilateral ties.

Erdogan also reiterated his call for fair burden-sharing on the issue of migration, urging the EU to investigate violations by Greece and the European Border and Coast Guard Agency (Frontex) that have been pushing back migrant boats.

Greece, with France's support, has disputed Turkey's energy exploration, trying to box in Turkish maritime territory based on small islands near the Turkish coast.

Turkey, the country with the longest coastline on the Mediterranean, has sent drillships with a military escort to explore for energy on its continental shelf, saying that Turkey and the Turkish Republic of Northern Cyprus have rights in the region.

To reduce tensions, Turkey has called for dialogue to ensure fair sharing of the region's resources.