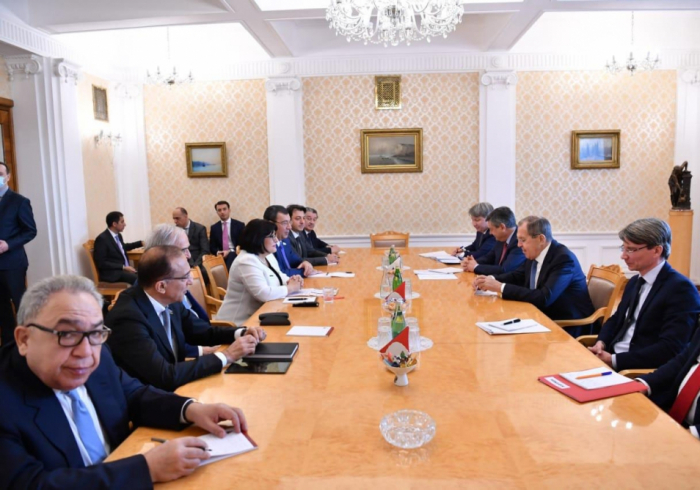 “Russia intends to deepen relations with Azerbaijan in all areas of life, including at the diplomatic level,” said Foreign Minister of the Russian Federation Sergei Lavrov at a meeting with an Azerbaijani delegation led by Speaker of the Parliament Sahiba Gafarova in Moscow, AzVision.az reports citing Azertag.

FM Lavrov expressed his confidence that the visit would make a valuable contribution to the development of Russian-Azerbaijani relations.

Speaker Gafarova said that Russia was one of the first countries to recognize Azerbaijan's independence, adding that a strong strategic partnership had been established between the two countries over the years. “"Regular contacts and reliable ties between President of Azerbaijan Ilham Aliyev and Russian President Vladimir Putin impart dynamism to bilateral relations, which can be characterized as relations of strategic partnership. Along with an excellent political dialogue, economic relations between the two countries are developing dynamically. Russia is one of the main trade partners of Azerbaijan,” Gafarova mentioned.

Gafarova also highlighted the Armenia-Azerbaijan Nagorno-Karabakh conflict. "The conflict continues to create serious obstacles to development of the region. Azerbaijan is committed to peaceful political settlement of the conflict. The conflict must be resolved within the framework of the territorial integrity of Azerbaijan in accordance with the UN Charter, relevant resolutions of the UN Security Council and the Helsinki Final Act,” Gafarova underlined.

“Russia, as a Co-Chair of OSCE Minsk Group, provides its support for Nagorno-Karabakh conflict settlement and spares no efforts in this regard. Russia supports Azerbaijan’s territorial integrity,” FM Lavrov said.