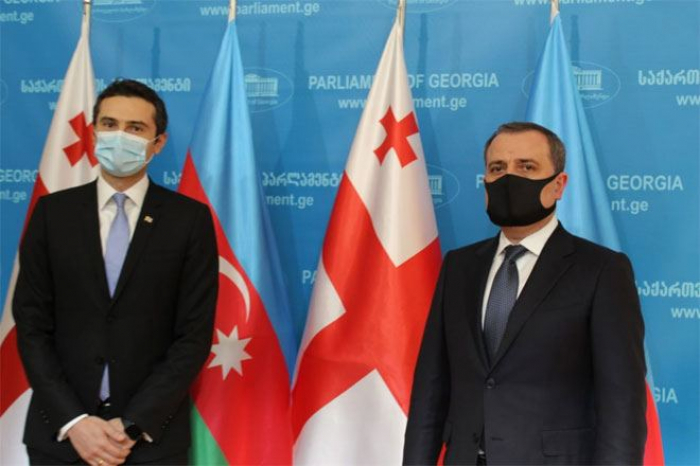 On September 24, Azerbaijani Foreign Minister Jeyhun Bayramov met with Deputy Chairman of the Parliament of Georgia Kakha Kuchava in the framework of his official visit to Georgia, the Foreign Ministry told AzVision.az.

The sides noted with satisfaction the further strengthening of the existing high-level relations between the two countries based on the principles of friendship and good neighborliness. In this regard, it was stressed that the existing strategic relations between our countries, as well as joint regional projects with the participation of countries, contribute to peace, security, and prosperity in the region.

It was noted that respect for the norms and principles of international law constitutes the basis of our bilateral relations, and our countries unambiguously support each other's sovereignty and territorial integrity.

Touching upon the relations between the Azerbaijani and Georgian Parliaments, they stressed that this cooperation is at a high level and that it is important to increase bilateral efforts to further develop this cooperation. It was noted that the friendship groups on Interparliamentary Relations played an important role in further strengthening high-level relations between our countries.

Kuchava personally expressed his condolences to the Minister and the people of Azerbaijan on the events that happened in the direction of the Tovuz district of Azerbaijan and stressed the importance of a peaceful resolution of the conflicts in the region.

In his turn, Minister Bayramov stressed that the two countries share a common history, culture, and traditions, and also face common security threats, and noted about the protracted conflicts in the region.

The minister informed his interlocutor about the aggression policy of Armenia, the latest military provocation committed by the armed forces of Armenia along the international border of the two countries, as well as the current tense situation in the region. It was noted that the ongoing provocative statements and actions of the current leadership of Armenia undermine the negotiation process on the settlement of the conflict.

At the end of the meeting, Minister Bayramov signed the Guest Book of the Georgian Parliament.